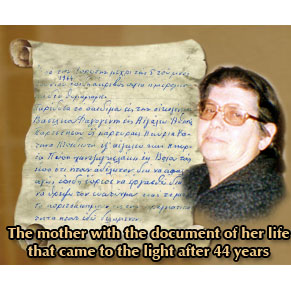 When her mother died, Claire Karasaini discovered in her bag two letters and a big secret
Share

The existence of her brother who was born 44 years ago and was adopted by Fagogieni family in Egaleo area. The biological mother was very poor, separated with the father of the boy and she was forced to give her child away. This life decision was written as a document by her father in a letter which kept for 44 years. This document was revealed on May 2nd of 2008 and opened a door for her life. Her brother was located and spoke with Claire. He also had a strange fate. His personal data was changed and the truth of his life was hidden from him.