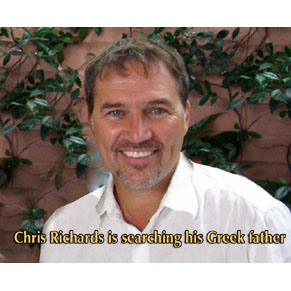 He came from Los Angeles to Greece to search for his unknown father on Friday 29th of May 2009.
Share

His personal research started from the Greek Law School archives of 1957. A secret concerning his life was revealed to Chris Richards, 52 years old. He found information about a Greek student of that time, who was his real father. All these years he believed that his father was an American officer who was married to his mother. His mother Katerina Nikita, a few hours before he entered ‘Tunnel’s’ studio, gave him the unknown information of his real father’s life. It was like a scenario of a 50s Greek movie. It was about a very handsome man of that era, who lived in Athens and had a younger brother. No one responded to Chris’ call and he left with a bitter taste. He still hopes that someone from his father’s family will appear and look for him.