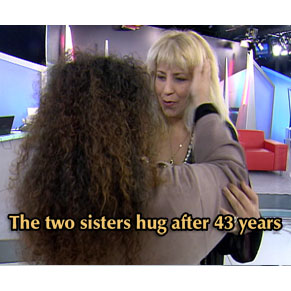 Watch the video with the revelation of a life 43 years later.
Share

Two sisters who were not aware of the existence of one another, joined in the studio of ”Tunnel” on Friday, June 3rd 2011. The scenes were touching. Helen Pantazopoulou came to the show to find her mother, Basileia Tsingou who lived in Peristeri in 1968. She learnt the truth of her life in a bad way during her adolescence. The adoptive parents gave her at the age of 18 all documents showing the details of the biological family. Over the past 12 years as revealed by ”Tunnel”, she remained every Friday evening stuck in front of the television with the hope that someone will look for her. During the show, she found her sister and shocked by the revelation of a life that she did not know, came to ”Tunnel” for the important meeting. Their mother had died 21 years ago. Both are now trying to cover the lost time.