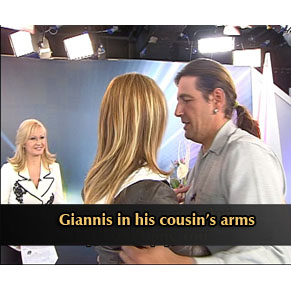 Giannis Balaktsoglou was in a big shock after he found out at his 40s that the couple who thought were his parents were total strangers.
Share

Trying to find his life truth, he discovered important data that his real mother left him, in case he decided to look for her. His biological mother is Antonia Litsika who used to live in Marousi area 40 years ago. Giannis was really shocked. During the broadcast on Friday 9th of November 2007, he found the truth about his life. His mother died few years after she gave birth to him. He found uncles and cousins who embraced him.