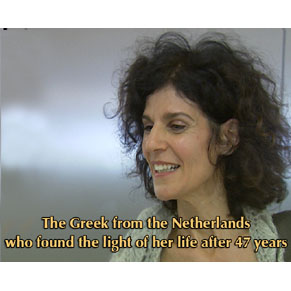 Emotional and sensitive was the story of the Greek from the Netherlands who came to 'Tunnel' on June 18, 2010.
Share

Alexandra De Haard came to Greece, at the broadcast studio, from Holland. She was looking for her mother and siblings, if they still existed, after 47 years. Alexandra was one of the children that the institution ‘Mitera’ gave to Dutch couples for adoption. Her biological mother, according to the information she left, is Polixeni Panagiotidou 70 years old, from Kavala. Life has opened its door to Alexandra. She found her mother who was seriously ill and met her sister whose existence didn’t know.