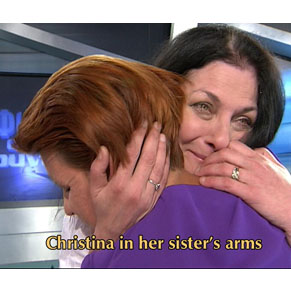 Friday 26th of June 2009 and a tender and emotional story was revealed at 'Tunnel'.
Share

When the sailor Grigoris Egglezos found out from his mother that he has a sister, who was adopted in the USA, he started a research in order to find her. After many years he found her at Vera Cruz, Mexico. Christina -Tammy Bratusek was at that time 23 years old. He brought her to Greece and she met the rest of the family in Athens. They promised never to separate again. But fate had other plans. Their traces were lost and for about 30 years, despite their efforts, they didn’t have any news from each other. Their mother died with Christina in her mind. She believed that Christina didn’t want her because she was poor. After three decades, Christina started from Texas once again to find her Greek family. She came to Athens and at the studio of ‘Tunnel’ she met her brothers and sisters.