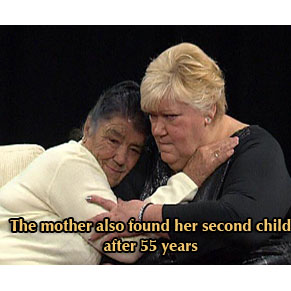 Kaliopi Georgouli touched viewers when she decided at the age of 73, to bring to light her big secret.
Share

The existence of two children that she was hiding from her Cretan relatives. After 53 years, on the 13th of November 2009 she found her son at ‘Tunnel’. A second miracle happened after so many years of silence. She reunited with her daughter that the TV show found after 55 years.