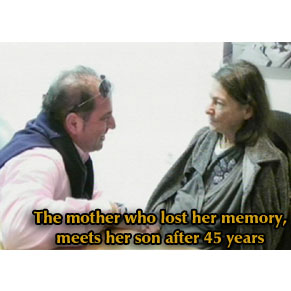 Fans of the show will remember Bastian Touwen, celebrity hairdresser from the Netherlands, who had come to Greece with Dutch journalists in order to find, after 45 years, his biological mother. Well known Greek football players stood by his side. No one expected what was to be revealed. A life like a fairy tale, full of twists. A brother who was adopted by an American family, a mother who believed that she was dead, a hospital and an institution with false information. Touwen’s persistence to get this story to an end led him to locate and meet his brother and to the ‘resurrection’ of his unknown mother. The evidence that came up after the research that ‘Rizes’ organization made at services’ archives, are shocking. Efrosini Mendrinou and not Ioannou, as her son believed, was found with poor clothes, without memory, hungry, living in a shack outside Agrinio. She was transferred to a hospital and after the treatment, she met her son. The scenes that followed were shocking…. She didn’t even remember that she gave birth to Bastian. Her memory had stopped at her first child. Bastian didn’t find open arms, did not feel the warmth of his mother but he got answers to the big questions of his life.