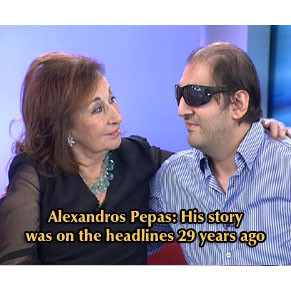 Friday 11th of June 2010 and 'Tunnel' tried to shed light in the darkness that plagues the life of a young man.
Share

Two German tourists found discarded in a grove at Metaxourgio area a little boy and brought it to the police station. At that time, for several days the newspapers’ headlines had the story of the child. The fifteen days-old little boy was blind. The actions of people who became aware of the story were touching. A lawyer called Gabriel Pepas and his wife adopted the little boy and the actress Pepi Metalidou baptised him. He was named Alexandros. Famous ophthalmologists moved by the story, operated the little boy without result…Alexandros, the 29 year- old blind musician, came to ‘Tunnel’ searching for the light of his life. The light of truth for himself and his biological parents. At the studio a surprise was waiting for him. His godmother stood by his side after so many years trying to support him so as to find his family. Unfortunately, there was no result. Alexandros still believes for a miracle to happen. He wishes to find the family that abandoned him because he was born blind.