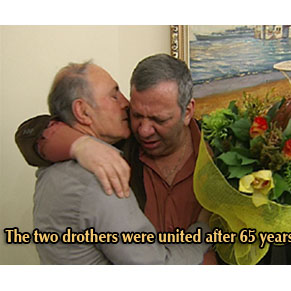 A picture of a Cretan young girl from 1943 led the way to the reunion of two lives and revealed a strange tender story.
Share

Anastasios Vavoulas 67 years old was abandoned during the German occupation, when he was two years old, by his mother Eleni Athanasaki, whose traces have been lost. His father Dimitris Vavoulas, who was 30 years older than his mother, raised him but he never revealed any information about her. The case that was presented at ‘Tunnel’ brought to light a strange game of fate. The mother died recently before she was able to see her child that abandoned during the German occupation and never told to anyone, because it was a responsibility she couldn’t handle. Her second son was killed in a car accident. Her third son Stavros was shocked when he found out that there was a brother whose existence didn’t know. The two brothers were united on Friday 15th of January 2010 and promised each other to gain lost time and never separate again. Fate played weird games.