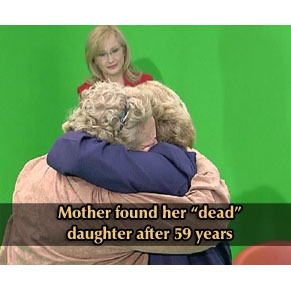 This is so true especially in the case of a woman who decided to unlock the door of her life after 59 years. When she started to narrate her story to the show immediately the solution was given. ‘Tunnel’s’ research came up with a positive result. Everybody thought that her daughter was dead but she appeared alive in the studio after 59 years. An amazing story which was revealed on Friday 28th of April 2006.