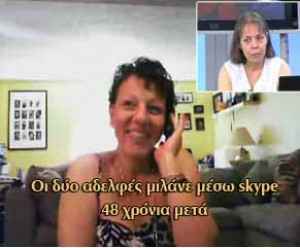 Watch the touching video of the two sisters in Greece and America, who were joined through the internet after 48 years.

Panagiota Striga from Killini was at the studio of “Tunnel” on Friday, July 1st of 2011. Her goal was to find her sister Marie Hasel with whom she was separated at the age of two. The show found Marie at Nebraska, USA and she contacted via skype with Panagiota who was at “Tunnel”. The moments were moving. Panagiota narrated the scene of separation. In the winter of 1963, the 2 year-old Maria wearing a red coat, she was crying and made the long journey: From Kastro of Kyllini to Nebraska in the United States. There he waited for her the American lawyer Richard and his wife Sisel Mor, who would become her new parents. She was the sixth child in a row of the poor family of Dimos and Athina Arvaniti. The brothers had not stopped looking for her and after forty-eight years they stretched the bridge of communication between Greece and America. “Tunnel” found 50 year-old Marie Hasel who was trying to speak ”the language of the heart” so as to communicate with the shocked sister. 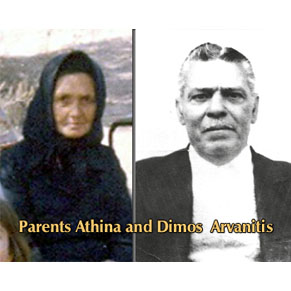