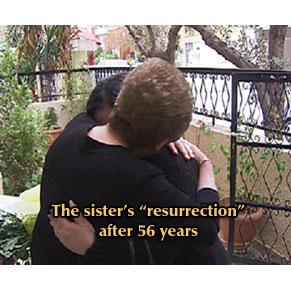 They declared her dead, was 'reborn' by another mother and after 56 years 'Tunnel' gave back her real identity.
Share

Irini Charchalaki who was born in Pireaus became the hero of an unbelievable story. An employee at the hospital she was born at, who was also a family friend, kept the secret of Eirini’s life in a diary which, when she died, gave it to her daughter. The daughter revealed details of the real mother at ‘Tunnel’. The real mother knew that her little girl was dead. On Friday 26th of March 2010, the shock of revelation and the meeting with the biological family was recorded on camera.