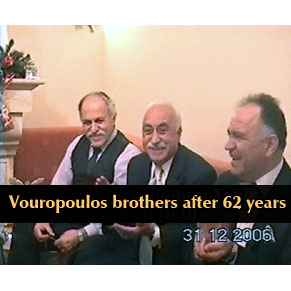 Friday 29th of June 2007 and the revelations were shocking.
Share

The man who had as cradle a garbage container, because he was left inside it as a child, found after 62 years the truth of his life. He was the third child of the Vouropoulos’ family triplets, from Giannitsa. Some cunning people from ‘Saint Stylianos’ orphanage declared him as dead and they gave him illegally for adoption. Charalampos Didis reunited with his five brothers that ‘Tunnel’ found and the moments were touching.