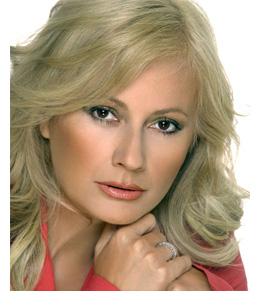 Angeliki Nikolouli was born at Pyrgos of Ilia. She has worked for almost 30 years as a front-row journalist at newspapers of Patra, Athens, in magazines and on television.
Share

As a young reporter she dared to work as a crime reporter, a very difficult field of journalism those years. Her revelations and her exclusive reportages, established her in that work and so she became the first woman who worked as a crime reporter in Greece. Since she was a student, she was distinguished in poetry and her poems were published at newspapers of Pyrgos such as ‘Paratiritis’ and ‘Efthini’. Then she worked at the newspapers ‘Gnomi’ and ‘Peloponissos’ of Patra, where she dealt with all kinds of reportage and especially with social issues and crime reporting.
The innovative, for those times, researches she made became the number one topic of discussion at the community of Patra (prostitution and exploitation of children, drugs, prisons).
At the newspaper ‘Apogevmatini’ in Athens, she continued her important researches and she was frequently travelling to other places so as to do her reportages. Her teachers in journalism those years were Christos Pasalaris and Giannis Voultepsis. One major success of hers was the revelation of the action of the rapist and murderer Kyriakos Papachronis in Thessaloniki and Drama and the interview she took from him in jail just a few hours after he was arrested.
When ‘Eleftheros Typos’ started being published, she was chosen as a member of the management staff. In the beginning as editor-in-chief of crime reportage and after as a supervisor for all kinds of reportage such as crime reporting, ministries, photo reporters. (The position she had in the newspaper was pioneer for a woman in journalism of those years). In that newspaper she made revelations that crossed the boarder of the country- high jacking, spying, terrorism while she contributed at the arrest of rapist and murderer of north and south suburbs, Spyros Beskos.
The every day contact she had with 911, gave her not only important news but also spicy stories that she reproduced with her humor, at her column she was writing at that same newspaper. In 1990, the theatrical writer, composer, journalist and director Alekos Sakellarios, helped her write those stories at a humorous book named ‘Ta piperata tou 100’ (‘The spicy stories of 911’).
She was later invited by the newspaper ‘Ethnos’ to take over the new magazine ‘Chronos’ and the social and crime reportage of ‘Ethnos of Sunday’. Her revealing reportages continued in that newspaper as well. She brought to light the case of wire tapping of politicians and important people of the country that were made by the National Service of Information. The documents she presented led her to the Committee of the Parliament to testify as a basic witness. She also worked at the magazines ‘Eikones’ and ‘Epikaira’. On television and specifically on MEGA Channel she began working as a colleague of Kostas Hardavellas at social reporting TV show ‘Horis Montage’. Afterwards, she took over the research of mysterious crimes and disappearances at the TV show ‘Reportage stin Omichli’ and she was co-presenter with Kostas Hardavellas at the same channel. After two years, on October of 1995, she started her collaboration with SKAI Channel, presenting her own, with long duration live TV show ‘Fos sto Tunnel’ (‘Light in the Tunnel’). She stayed at the same channel when it was later renamed ALPHA. In 2001 she started presenting her TV show on Alter Channel which was then a new, small channel…In 2012 she returns on Alpha and she continues her researches and revelations through her TV show ‘Fos sto Tunnel’ which is a very popular TV program with high ratings up to 70%. (Case of Nikolaidis- Kalathaki- Krabis)
She has a son called Konstantinos who has studied film direction in England and in the United States of America where he remains, serving the profession he has chosen. The name Konstantinos was given to him by the fondly remembered President of Democracy Konstantinos Karamanlis.