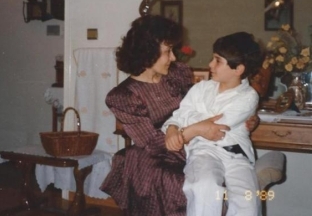 Marios, my soul will not find peace until i find you.
Share

With these words, the mother of Marios Papageorgiou, 26 years old puts an end to her message four years after his murder. The last time Mrs Varvara Theodoraki saw her son was on Thursday 9th of August 2012.

Today she is still strong and seeks for answers.

She demands from those who are convicted by Justice for the murder of her son, to talk.

She lives waiting for the moment when she finds again Marios and bury him in honour.

Mrs Theodoraki talked to our Show and with tears in her eyes she claimed:

I hope that God will help them confess where they buried my son. I want to find his bones. I do not ask for anything else. Whoever knows, i want him to speak and put an end to my pain.

The message of the mother

Read the message that Mrs Theodoraki posted on Facebook:

Black unniversary. There has been four years since the last time i heard your voice, you hugged me and told that you love me. Four years and my eyes are still wet. My soul will not find peace until i find you, to make a grave for you, to talk and touch you even through a cold marble. Marios, I love you.

The court of Αppeal is scheduled for 16th of September in Athens. At first degree, Petros Mihaleakos was convicted to life imprisonment and his wife Voula Sioutalou in 18 years of imprisonment. Four of their partners were convicted to jale but there was a respite for them. Two others were found innocent.