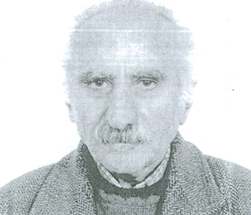 Dementia led him first to disappearance and then to death.
Share

A month or so after he had gone missing, the 81 years old Konstantinos Almetidis from Metalliko, in Kilkis was found dead. A fellow villager shepherd accidentally spotted the body, 3 kilometers away from his house.

The poor man had gone lost on April 26th.