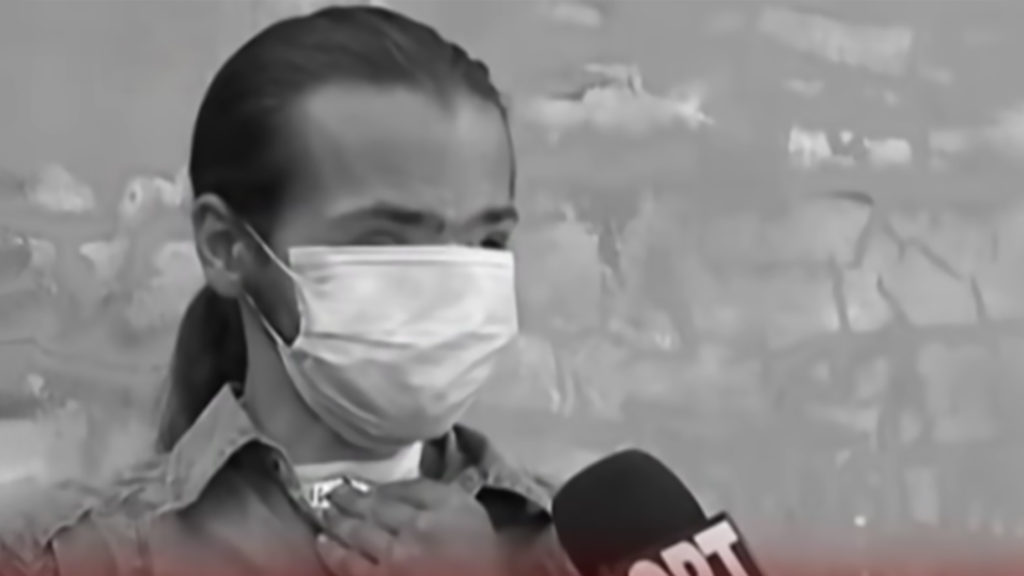 The show that highlighted Bullying, investigated in depth the case of Thymios, which has shocked the public.
Share

With a tv crew sent to Pirgos, where the events took place, “Tunnel” showed both the tragic story of the unfortunate man and unknown elements of this thriller.

Relatives, neighbors, residents and the mayor of the city, spoke about 39-year-old Thymios Bougas, who went missing on Wednesday, May 4, from the area of ​​Agia Varvara, where he had found temporary accommodation.

The person who “starred” in the video brought to light by Angeliki Nikolouli and can be seen throwing the sparklers to Thymios’s house also spoke on the show.

Other members of the group of bullies also spoke, who pushed Thymios to extinction with their extreme behavior.

He was vulnerable due to his serious health problem. He circulated with a mask only at night, so that people would not see his deformed face.

His sister’s husband, speaking on the show, referred to the real causes of his deformity.

“Some problem he had, led him to self-injury in the past. The Tripoli Police knows this very well. Maybe out of erotic frustration. We told him and his sister to leave Tripoli, to overcome some situations and we brought him here, to Pyrgos. At one point he wanted to be alone. He thought it was a burden on our family. He did not feel well, because the children also looked at him strangely when he was young. We helped him stay somewhere alone, but he made mistakes, as all people do. He had a serious communication problem, people saw him as something strange. He began to close in on himself, to isolate himself and to reach where he is now. Regardless of any misunderstanding between the brothers, we tried to help him. Thymios is just a bit of a difficult character due to the accident he had. He was not receiving help. “He wanted to do it alone,” describes his son-in-law.

Mr. Kotsakis, referring to the video documentary revealed by “Tunnel” and which shows the company of “bullies” throwing sparklers at Thymios’s house, pointed out that it is reprehensible.

“When a person gets to the point of shooting himself, he can hurt himself again. We are afraid. “Let Thymios be found and let us help him from our side as much as we can”, he concluded.

Thymios is one of the thirteen children of a poor family.

The thugs who threatened Thymios…

A friend of the group of “bullies” who took part in the incidents of intimidation of the missing Thymios, spoke to “Tunnel”.

“These are a bunch who make fun of a lot of people in Pyrgos, unfortunately. I’m away from the company. Because they have money and such, they think they can do whatever they want to everyone. **** just turned 18 and the other kid who shot the video is younger. One of them constantly does not eat, because he has regretted it and tells everyone. He really wants to find this man so that he can sit down and listen to his story and what he has to say to him because he really wants to help him with his health. **** wishes the opposite. He is the one who had made the rumor that he was circulating with an ax or a chainsaw, something that had never happened to Thymios. They did not know this man who had disappeared before and the ***** had taken him out and so the rumors spread… They challenged him and pulled videos that were then published on the internet. “This is really very sad for all of us,” he said.

“It was my mistake… I want him to be found!”

The TV crew of “Tunnel” located and spoke with the 20-year-old who was throwing sparklers at the house of the unfortunate Thymios. Referring to the joke, which he says was done to him, he seems to have now regretted his act.

“I heard that you are in the city and I imagined that you would be looking for me too. I do not want to talk about it. I suck. I will only tell the truth, as I told the police. I did a huge stupidity, a joke without any excuse. Anyway it was wrong. That does not change and I regret it. I did not know this child. I did not know his problem. I had no idea it was disabled. I would never dare to hurt such a person because I know from my family. But,… stupidity, wrong. We did not start it, without justifying anything. Some children from the group came and told us that he threw himself in front of them with a lottery ticket and took them hunting. I did not know what had happened, I was not in front, I just followed when some people said they knew where he was staying. It was nonsense, I do not want to discuss it anymore. May the man be found. I have upset my mother, my friends. I’m not a bum, it was a misguided action. I threw the sparklers in an empty house, it did not stay there. It was a place they had long seen him enter. “I’m sorry you know about everything,” he told the show’s reporter who met him.

“The young man who was driving in the video collapsed…”

“Tunnel” spoke with another person who knows the children who star in the controversial video brought to light by the show. The witness spoke about his “crushed” friend and his heinous act.

“I know him very well, as well as his family. He does not want to talk… He is overwhelmed. I want to catch him and ask him what happened and why they did it. But I can not. “When the other person is in a bad psychological state, he does not want you to burden him any more,” he said characteristically.

What is striking is how it is possible for a friend who is only 17 years old to drive a car.

“He has a degree normally,” he says.

The young man’s parents seem to have learned through the show about their son’s “achievements”.

“His parents found out when the video was released by Mrs. Nikolouli. They logically saw the show and understood his car. It was eleven people if I saw correctly. To tell you the truth when there is such intimidation, no matter how much you want to correct it, unfortunately that does not change, you have committed it. The act is reprehensible and we hope that Thymios will be found and will be okay. It’s not right for families either. They have not given rights. We are in a closed society; we are not in Athens. “We hope everything goes well and that something similar does not happen again,” he concluded.

“He only went out in the neighborhood at night…”

The camera of the “Tunnel” was found in the neighborhood of the missing Thymios and talked to the people who saw him circulating mainly at night, as he was ashamed of his deformed face.

A neighbor of the missing person states that for the last two years he hid in two houses that were not abandoned, their owners simply lived in Athens.

“I have not even seen him as a face, he only went out at night. When they threw sparklers at him, yes, I heard them, but I did not go out because I thought they were children. I did not understand that they were throwing them at Thymios. We all want to be found. He is forced to do what he does. He goes to one house, he goes to another, he hides. How will he live? “If they do not give a help, a roof, a plate of food?”

Another neighbor of the unfortunate Thymiou states that he saw him usually walking at night and expresses his concern for his life after so many days that he has disappeared.

“Quiet man, he had never bothered anyone. He should have given a sign of life for so long. He goes on to say that something is happening. ”

The 39-year-old’s neighbors are shocked by their description of Thymios.

“He was a sick child, with special needs, an orphan, alone, without a permanent home, who needed help. This poor, scared animal, hid somewhere. “I do not know if he ended his life. He had serious health problems.”

The journalist of “Tunnel” together with the leader of a group of volunteers who have already done the first investigation, were found outside the house where the 39-year-old had taken refuge on the night that a group of young people threw sparklers at the house where he lived.

According to Dimitris Chalastras, the padlock on the door did not exist in the past and seems to have entered recently. However, there is an opening that anyone could go through and enter the backyard.

“This man has a problem with his jaw and larynx. In order to speak, he has to press a button and be fed in two ways. Either with mechanical support, or with a multi to grind the food. Has he left and is he hiding because he was scared? Has he lost his life because he was scared? We are looking for this man to see exactly where he is. A person who needs psychological support may not be able to function his mind clearly. “We will do everything to find doctors, orthodontists, plastic surgeons to help this man return to his former life.”

The “Tunnel” conducted an on-site search of abandoned buildings and old train carriages, in an OSE train, but also in other places where the missing Thymios could have found refuge.

“We are ready to help and come with volunteers to explore the area. “There have been searches everywhere, but the areas are very large, which requires organization and more volunteers to search all these areas,” one of the rescuers told the show’s camera.

Panagiotis Antonakopoulos, Mayor of Pyrgos, condemned the incident of intimidation against Thymios and stated that if a survivor is found, the Municipality will be by his side.

“Everyone is worried now because a sad story has come to light after this disgusting behavior of a small number of locals. We unequivocally condemn the phenomenon. This bullying is fed more through the internet, it is not easy to intervene immediately. The locals helped him and offered him a job. But he was a man who had withdrawn and lived outside the house only a few hours of the night. His problems had certainly affected his psychological integrity. The Municipality supports those in need and through OAED programs helps them find a job. “The first is to find the person and see if he is well and the second is that we should stop being spectators in this story called bullying,” said Mr. Antonakopoulos.