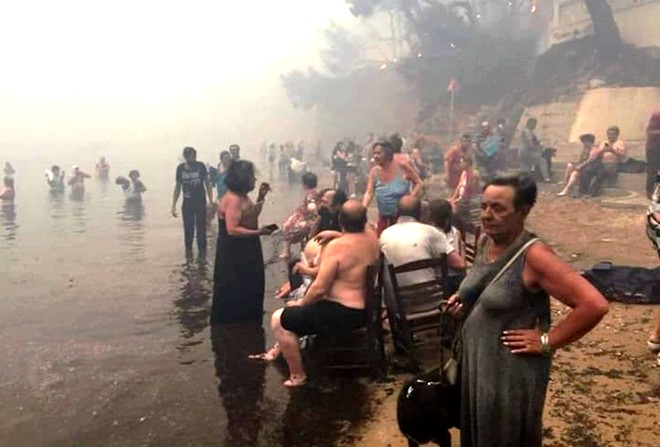 Greecesinks into mourning and crying the dead of the biblical destruction …

Burned bodies… Caught in houses and cars, children in the hands of their mothers. People who did not manage to escape the fiery “monster” that swallowed them in a few minutes… Fortunes became ashes, the number of deaths constantly rising.

The plan of the arsonists was organized for a strong blow. This summer they wanted dead people, a lot of dead people.

The multiple fires in Attica but also in other areas of the country, the study of the strong wind, the dispersal of the coping forces, Rafina and its port, the tourist areas, the lack of organization and the insufficient prevention plans of the Municipalities and Authorities …

For so many years as a journalist, I remember to cover  fires always on the forefront of events. Only a small number in this huge fire climax in the Greek territory was of negligence of the citizens. In the trek we made in the burnt land, we used to found incendiary mechanisms. Elements, traces, signs that witnessed the devastating plan of “unknown arsonists.” I do not remember all these years that the crime is punished. Neither do we see a strong organizational plan to prevent and deal directly with such disasters.

Why did the Municipalities and Authorities not directly organize the armed forces and the volunteers to save the caged citizens from the air and sea?

How does the country’s Information Service work?

Do the Authorities estimate the information they receive for foreign agents moving to Greece and “light up” the first sparks of their organized project?

July 23, 2018 will be recorded as the “Black Monday” that Attica lost its people and two of its last oxygenated lungs …