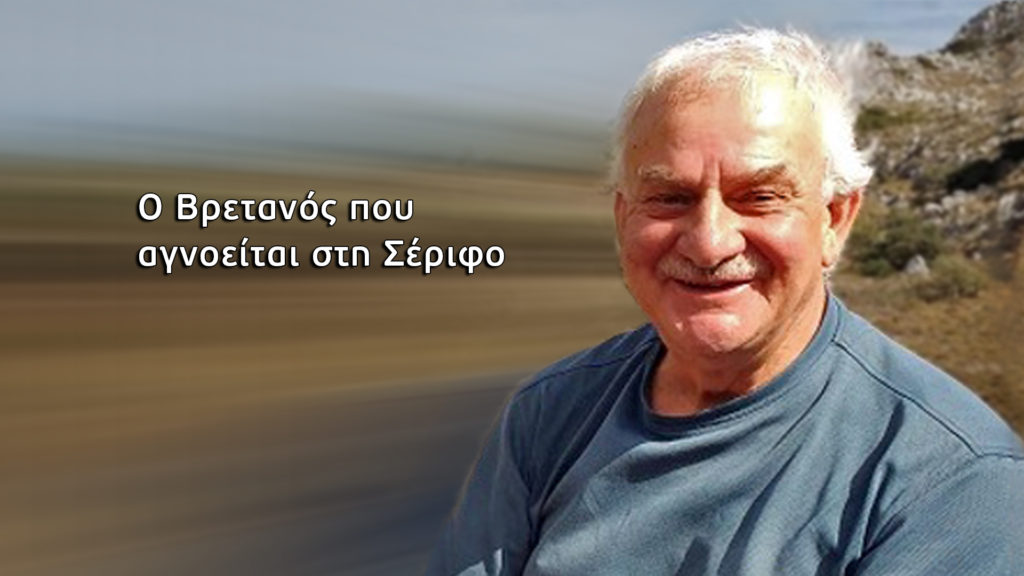 Agony, sadness and pain for the family of the English tourist, who disappeared on the island of Serifos.
Share

David – Andrew Wolstenhulm, 69, disappeared on the morning of Friday, June 25, 2021, when he left the hotel room where he was staying with his wife, in the Livadakia area.

The retired tax expert in an accounting company was in Greece on vacation with his wife, Heidi. That day he left for hiking in the mainland of the island, something he used to do. Initially he was to be followed by two of his friends, who were also on the island for vacation, but due to the heat they regretted it.

All his belongings, even his passport, were found in the room. There were no cameras in the accommodation, nor in the surrounding area, which could have recorded his last movements.

The previous day, he had expressed his desire to go hiking on the marked paths of the island, starting and ending in Chora. In between, it would pass the settlements “Panagia”, “Sykamia”, “Galani” and “Pyrgo”. These trails are for experienced hikers, like David.

The disappearance was dealt with by the British television network ITV, which cooperates with the “Tunnel”. The appeal of David’s relatives who appeared on ITV, but also on the show, is to continue the investigations, which at first were organized, but then stopped.

In connection with the “Tunnel”, Konstantinos Revinthis, Mayor of the island, promised that when the weather allows, the investigations by Police, firefighters, Civil Protection personnel of the island and volunteers will continue.

“It signaled an alarm but we did not find any trace…”

Lora Stamataki, owner of the tourist accommodation where the missing person lived with his partner, spoke to “Tunnel” about the day of the disappearance and the alarm that signaled.

“It was the second time they visited the island. The first was fifteen years ago. He loved mountaineering and that’s what he would do that day. It started at 08:00 in the morning with a destination in Chora of the island. At 20:00 in the afternoon his wife came anxiously to the reception. She tried to contact him, to no avail. He had told her that at 17:00 he would return. The police, the civil protection were immediately notified and together with the island’s fire department, the investigations started that night, which lasted for about a week. As far as I know, a day or two after his disappearance, his cell phone signal was found for a few minutes, but it disappeared again. “At one point, a group of police with dogs came to take part in the search, but the conditions were very difficult, as it had about 40 degrees,” he told the show.

She states that it is an unprecedented incident for the island and has upset them.

England: Anxiety, questions and pain in his family…

David’s wife and sister, who live in a small village in North Yorkshire, England, spoke on the show.

“It seems strange to us that no one has seen him. I have all these bad thoughts circulating in my mind, that he may have fallen into one of the old mines, where he may have been walking from above without knowing what is below. It is terrible in thought alone. The scenario of someone hitting him with the car and disappearing for fear of the consequences, is something we are thinking about, but I do not think there are many cars out there. “We are talking about a quiet island,” said his wife.

She spoke of a very active man, who loved mountaineering and walking.

“She was very healthy for her age. It closed at 69 last April. He has been in shape lately. He went out for a run here where we live and for long walks. So, the ground in Serifos was not difficult for him at all. This is the reason why none of us can imagine what has happened to him. All we want is to be found. Someone out there, a climber or a walker, just to have his mind in case he finds something. “What we would like is to do some additional research on the island, especially in the area where the signal was found from his mobile phone.”

“We mourn anyway, but we need to find him so he can rest. As things stand now, the mind is constantly working and we think about what may have happened to it. It is the worst nightmare. It’s like these things you see on the news happening to other people and you are sad, but you never imagine that something like this can happen to your own family. We are just devastated. “The possibility that we will never be able to locate him is very difficult to capture.”

The missing person has a height of 1.75, while on the day he disappeared he was wearing a very intense blue shorts, mountaineering shoes, a dark blue short-sleeved T-shirt and a blue hat. He had a blue backpack with him, his cell phone and possibly a compass.