Angeliki Nikolouli was awarded by the Retired Officers of the City Police, with the occasion of the 50th anniversary of the founding of their Panhellenic Association.
Share

The journalist first woman police reporter, was honored for her long tenure in the police and social documentary and journalistic investigation of the crime scene. 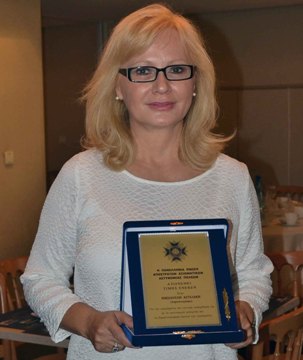 The award ceremony was held in a solemn ceremony in the morning Tuesday, November 11 at the hotel “Amalia”, presence of former Chiefs, Generals and Senior Officers who for years staffed the Creek Police.

Visibly moved Angeliki Nikolouli spoke during the award, for her first steps in her career. She said: “I lived the City Police as a young police reporter and the establishment of the Department Researchers, today Homicide. What I kept from you and which cultivated my knowledge in my work is the way you were dealing with crime. How you convert the information into evidence at those difficult years of research, when there were no modern methods available as today. With proper thought, thoroughness, perseverance and hard work for 24 hour in order to not leave any case unsolved. “ 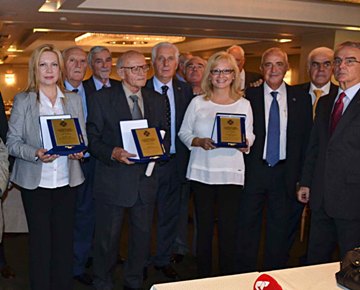 The reporter thanked the Panhellenic Union of the City Police Retired Officers for their honor and she wished the younger officers to walk in the footsteps of the old.

The Association also honored for their contribution to society, the oldest living City Chief of Police Mr. Vasileios Tzavelas , the oldest president of the Union, Honorary Chief of Police Mr. Konstantinos Lemonis, the Director of the Medical Service of Greek Police Plato Zafiris and the superior of blood donation department of the hospital “Amalia Fleming” Mrs. Efstathia Katoikou.