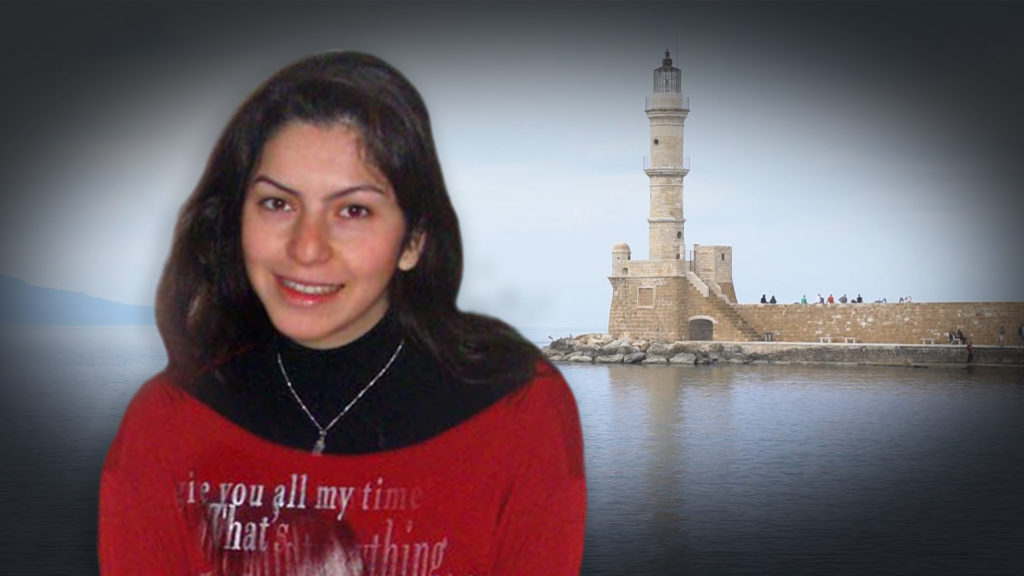 A letter brought turmoil and opened the closed case of the thriller of the beautiful nursing student who the "Tunnel" was looking for.
Share

The new investigations for the location of Angeliki Stavroulaki from Chania, led to monasteries in Greece and abroad…

On the eleventh anniversary of her mysterious disappearance, her sister “spoke” to her with a letter wishing “to be alive and listening to her”.

The family’s hope was revived after information reached both relatives and the show. They were showing Angeliki in a monastery. Respecting this choice, her parents and siblings sought her not to disturb her peace, but to get the sign of life that they have been looking for years.

The response from viewers was immediate and moving. They were mobilized in Greece and abroad, giving the stigma of monasteries in which there are nuns with common characteristics.

Despite that it was late at night, the “Tunnel” investigated in Romania, while during the day it had been looking in Jerusalem, Bulgaria and Serbia.

The information that arrived from a monastery in Messinia caused a disturbance on the show. She was talking about a young nun, whose image matched that of the missing Angeliki. The information was accompanied by photos and videos of her. Angeliki Nikolouli appealed to the officials of the monastery to get in touch with the show to clarify if the nun was Stavroulaki. She responded immediately and she talked on the air of the “Tunnel”.

“I am not the nun you are looking for. Because I watch your show every week, I saw the photos and we really have a lot of characteristics in common with the girl who is missing. My parents know I’m here and they accepted it, although at first they did not agree with my choice. If Angeliki is alive, let her inform her family that she is in good health and she has chosen the monastic life. The same can be done by the abbess of the monastery, who may be hosting her. It is unfair for her family to suffer for so many years,” she said.

With a touching letter, the sister of the missing student expresses her wounded soul.

“My beloved, my sister, my only child. You know how many times I have tried to write to you but I could not make it. If only you knew how much I miss you. You cannot imagine what my life and my soul are like from the day you decided to leave us. I know you did it in a moment of weakness. At a time when everything around you had collapsed. Because you were disappointed that you could not cope with your studies. If only you knew how we are from that day. Our house is like a living cemetery. Everything has been shattered. There was an earthquake in my soul as if you shook everything inside me. My hair has turned white. Every February 18 we hold a service for you in Agios Georgios under our house. This year when the service was over, snow fell around the church. As if it was a sign from Christ that you are alive and in good health. I wish she is in a monastery, as we are told. I will have a joy for life again if I know you are alive.”

The emotional song for Aggeliki…

Stelios Stavroulakis, brother of the missing student, created and posted on his personal Facebook account a moving video with photos from her childhood and adolescence. The video has been “dressed” with mantinades by George Sifakis, a resident of the village of Asi Gonia.

“Someone was waiting for her near the church…”

The sister of the missing student from Chania describes on the camera of “Tunnel” what happened that day and how her traces disappeared.

“That morning we had an appointment to go for a walk. I called her on the phone, but she did not answer. A little later, our brother informed me that she had left her car outside a church and that they were looking for her. Everyone and Mrs. Nikolouli were mobilized immediately. We were shocked. A villager saw her crossing the main road impatiently, as if she was waiting for someone. She did not take any of her personal belongings with her, except her mobile phone. The last position of her phone was found in Vrises and from then silence…”, she said characteristically.

“We first looked for her in a monastery. I want to apologize to the nuns at the monastery of Agios Theodoros where we entered their cells to search and disturbed them. It was a mistake and a move of despair,” she added.

“We have aged before our time, while we are in the best years of our lives,” she concluded at an emotional state.

“She would not hurt herself…”

Despina mentions what had been bothering her sister lately.

“She was upset because she did not like her school. He did not want to continue in nursing and wanted to drop out. She was worried because she thought our parents gave a lot of money for her and she would not finish the school,” she told the Tunnel camera.

She describes herself as a sensitive soul, a social person, with many friends. At school her teachers were saying the best things about her.

“We never thought she would hurt herself. We feel that she is alive. Shortly before she went missing, a witness saw her getting into a white car.”

Angeliki Stavroulaki disappeared on the morning of Thursday, February 18, 2010, when she left her home in the village of Asi Gonia, Chania, in the family car. Later it was found abandoned on the national road Chania – Rethymno, on the Petre bridge, outside the church of Panagia Pammakaristos. It was unlocked, the keys on the engine and inside there were all her personal belongings and her id card.

Watch excerpts from the research of “Tunnel” in Crete.