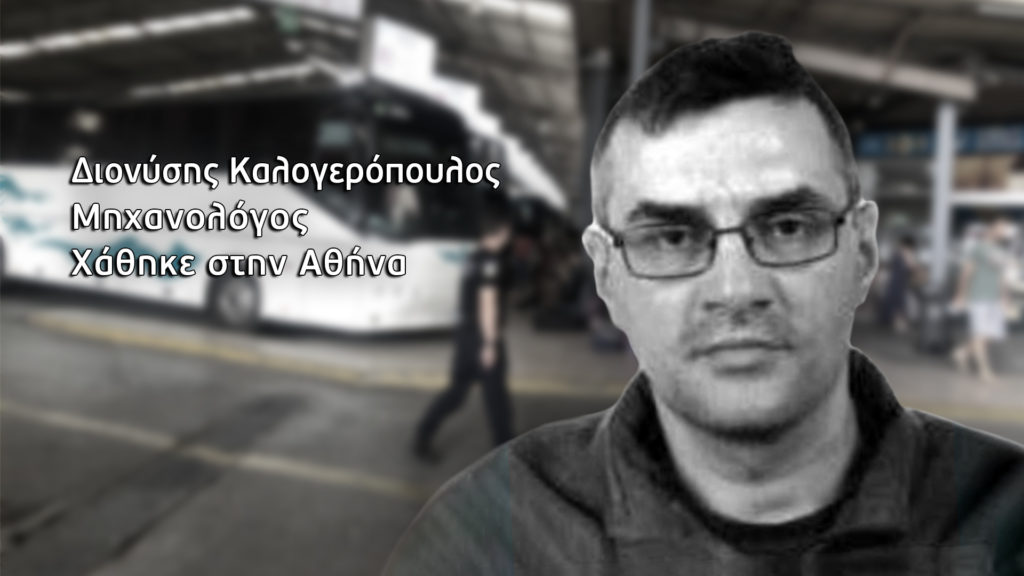 It was 19:00 on the afternoon of Friday, November 5, when his cell phone was last broadcast from the center of Athens. Shortly before, he had contacted a friend of his, telling her that he would go to her house to spend the night, but he never arrived.

His sister, who was waiting for him at the KTEL bus in Zacharo, where they live, found out that he had not boarded the bus from Athens, as he had told her. In the morning of the same day he had left Zacharo by KTEL bus for the capital.

He used a bus because his car was destroyed in a serious car accident two weeks before his disappearance. He was miraculously saved, coming out of the passenger door.

During the show, a viewer sent a visual document from a security camera, showing a man with common elements, getting off a bus in Athens. Dionysis Kalogeropoulos’s sister confirmed that it was indeed him. The camera recorded him the same day he disappeared.

“We think of the worst scenario…”

His sister in agony gathered her strength and came to Athens to find the edge in this strange disappearance.

“We are very anxious about where he might be and what he does if he is well. We are having a very difficult time. At this time we make a lot of scenarios and our minds go to the bad ones. I am afraid he may be in danger, he may need our help and we cannot offer it to him,” she said.

The last position of the mobile of the missing sailor was recorded on the day of the disappearance at 19:00 in the afternoon from the center of Athens.

“I called a friend of his and learned that he had texted her that he would be staying there that night, but he never went. Two days later I was informed that he had talked to another friend at 17:00 in the afternoon of the day he disappeared and told him that he would go to Thessaloniki at some point to buy a car. Indeed, we had arranged to go together next Monday”, she added, while she also mentioned the reason why the missing person wanted to buy a new car.

“Almost two weeks before the disappearance he had a serious car accident and miraculously survived. The vehicle rolled over and he came out of the passenger door. I am really moved by the interest of the people, because there are many people who love him and are very worried about him. Whatever happens, I just want to find him,” she concluded, emotionally charged.

She appeals to viewers.

“Anyone who has seen something and can, please help us and I will be grateful. We are talking about a young man. He’s the most important thing I have. For me, Dionysis is the gift of God in my life”, she said at an emotional state.

“I’m the last person he talked to…”

The “Tunnel” located and spoke with the girlfriend of the missing person, who seems to have been the last to contact him. Shocked, she describes to the journalist of the show what unfolded.

“At 16:30 on the day of his disappearance, he sent me a message to host him at my house. I told him I was going to finish a job I had at 22:00 at night and we arranged to meet at that time. I sent him a message around 22:30, but he did not answer me. I was not worried because I thought he would have gone to stay with another friend. The next day I started worrying because I talked to his sister and she told me that she had not heard from him for over twenty-four hours. Then I called a mutual friend of ours, but he had no idea, as they had days to talk. It seems that I was the last one who came in contact with him”, she stated characteristically.

She herself expressed her belief that something bad must have happened to him, because if it was anything else, he would have informed her.

“I am convinced that something bad has happened. Whatever might was the problem, he would tell me. We have to worry because we are talking about a very good and very intelligent person. What can I say, I’m trying to be cool, but I’m worried”, she concluded.

Dionysis Kalogeropoulos has a height of 1.80 and brown-gray hair. When he disappeared, he was wearing a khaki cardigan, a black blouse, gray tracksuits and black sneakers.

For his disappearance Missing Alert has been activated.