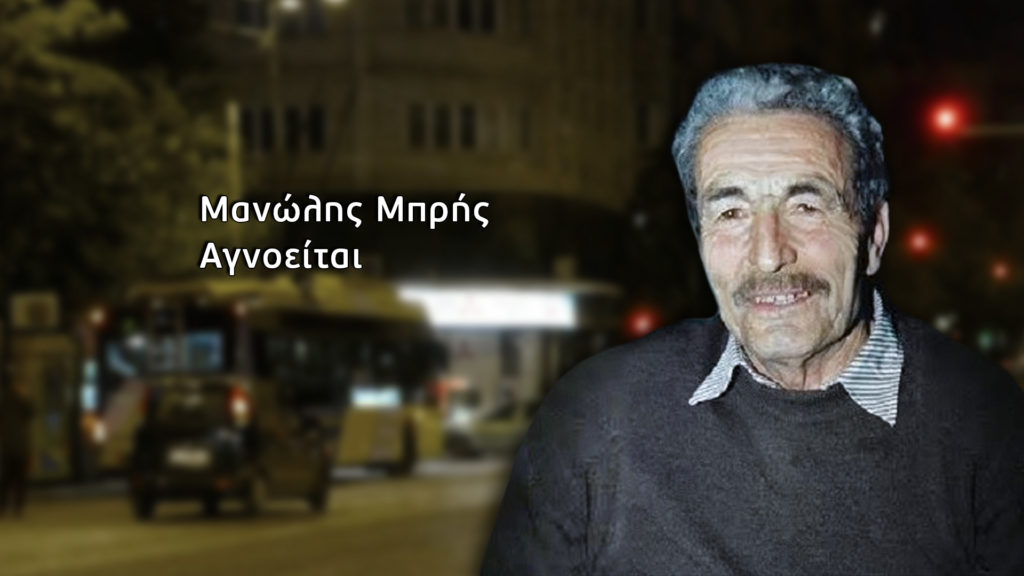 The relatives of the missing elderly man, who went missing from Acharnes, are living days of agony.
Share

Manolis Bris, 81, a retired sailor, left the house where he lives with his partner of twenty-three years and her 38-year-old son, in Menidi and disappeared.

It was Wednesday, January 5, when he went out for his usual walk in the area. He did not return at two-thirty at noon, as he used to do and his partner’s son, set off the alarm.

A resident of the area who knew the missing person, claims that he saw him two days after the disappearance outside the Workers’ Housing Association of Profitis Ilias, very close to his house. He looked upset and told him that he would take the bus to Ano Liossia. The witness saw him waiting at the “Acharnes Horsemen” stop and boarding bus 733.

According to the driver, at about half past eleven in the morning he went down to the “Kastoria” stop and saw him turning left towards Fili.

From the day after his disappearance, his son Manolis Bri, who lives in another area, looked in all possible places he could have passed, showing his photo and asking for information.

In a live connection from the City Hall of Acharnes, which is close to the house of the missing person, the external investigation team of “Tunnel”, together with the volunteers of Acharnes Citizens from the Social Project “Offer”, moved in the night in the area investigating information that arrived.

They were talking about a homeless man, who looked like Manolis Bri. Volunteers and relatives will search in the coming days to see if it is the same. But as time goes on, time counts down…

He has a height of 1.63, gray hair, brown eyes, and his special feature is his mustache.

The day he disappeared, he was wearing a dark blue jacket, gray sweater, gray cloth pants and black shoes.