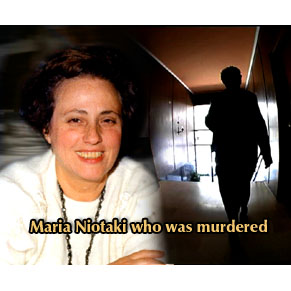 On June 19th of 2007, the court of Athens with its groundbreaking verdict in Greek times, convicted in life imprisonment Leonidas Varras (he deceased during imprisonment).
Share

The judge found him guilty of assassinating his cousin Maria Niotaki aged 62, a lonely and rich Athenian who went missing in 2002, despite the fact that her body was never found. Angeliki Nikolouli was a key witness in this court and revealed important documents. If her friends hadn’t looked for her, if ‘Fos sto Tunnel’ hadn’t searched this case in depth, everybody would have believed that she was abroad, as her cousin claimed. The show solved the case of that lonely woman through documents and important testimonies. The research followed her path during that morning of December of 18th of 2002, when she went to the bank in order to withdraw some money. There she noticed that her money – several millions – has been vanished. Due to her shock, she forgot her identity card and the employers of the bank called us. Eye-witnesses heard the upset woman talking to her cell phone, asking her interlocutor to go and pick her up from the bank. ‘ Tunnel’ found out that she was talking with her cousin who was managing her property and made withdrawals with false documents. The research showed that the driver who picked her up from the bank, killed and threw her body away… Just before her disappearance, Niotaki confided in her friends that she was trapped under a circuit of fake contractors, lawyers and other crooks that her cousin had introduced to her. She wanted to renovate the building that she owed at the center of Athens. They deceived her and she threatened to reveal them. During ‘Tunnel’s’ research, her biological family was found (she was adopted) and all together searched for Maria. That was something that her cousin never expected because he wa introducing himself as her own relative. Moreover, he demanded from us to stop the research but Tunnel’ carried on despite his threats. Finally, the case was solved. Another murder without finding the body was revealed.