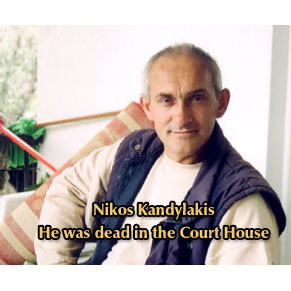 On Friday, March 11th of 2011, "Tunnel" revealed the deficiency in the security system of Evelpidon Court House.
Share

The key to the disappearance of 47 year-old Nikos Kandylakis, father of four children, was hidden for seven days at the building number 9 of the Court House. The show brought this case to light with persistent research in that place. Kandylakis was dead for a week because of pathological causes inside the Court House, in the toilets of building number 9. His body blocked the door to open. The cleaning ladies informed their superior but nobody went to see what the toilets were hiding! After the persistent research of “Tunnel”, the staff became suspicious and sent a crew that found Kandylakis dead. According to the pictures of the camera of the court’s parking, on Wednesday, March 2nd at around 9:30 in the morning, Nikos Kandylakis, driver of a tractor at a company situated at Koropi with structural material, left his car and headed at the elevator that led to the court. He never arrived at the court room where, because of financial differences with a company he was cooperating in the past, a trial would take place. From that moment, his cell phone was off and there was no communication with his family. “Tunnel” searched all possible versions and reached the place where the unlucky man was last seen. The testimony of an employee, saying that he was in a bad condition at building number 9, enlightened the case. All evidence showed that he was trapped at the Court House but the staff there couldn’t realize it.