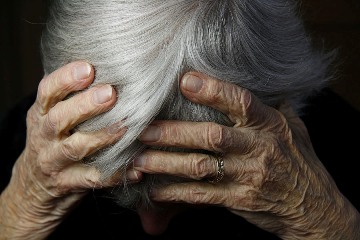 The foundation Line of Life on 15th June, International Day of Elder Abuse, presented shocking evidences about the elder abuse not only in Greece but also globally.
Share

The National Line SOS 10-65 got 333 calls about elder abuse during the 25 months of its operation.

According to its communication offices surveys, from 2010 until 2013,

t142 seniors were victims of fraud.

Although in Greece there is not a systematic listing about elder abuse, the research of ABUEL (Abuse and Health Among Elderly People) has shown that from 2008 until 2010, 126.111 seniors were abused.

According to the World Health Organization (WHO), every year globally:

It is worthy to mention that in Europe two of three abused seniors aged over 80 are women. One third of them suffer from Alzheimer or dementia. 2500 victims of elder abuse are murdered yearly, the majority of them by family members.

If a senior of your environment is a victim of abuse, may you see some changes on his/her behavior.

In any case do not ignore these signs:

1.tChanges on the behavior, i.e. swore, anger, or melancholy.

2.tChanges on the look, i.e. wearing the same cloths or not washing himself/ herself.

3.tChanges on the routine, daily or occasionally: denial to go out, denial to have visitors, denial to do anything he/ she used to.

4.tInjuries, which appear again and again, i.e. bruised eyes, bruises all over the body or injures by knife or other sharp objects.

5.tUnreasonable or unusual economical difficulties, as unpaid bills or other debts.

6.tWeird reaction to anything normal and usual.

7.tAsking for attention, a sign that shows that a senior feels more secure when other people are around him/her. 8.tSigns of fear, when a particular person enters the room.

9.tObvious signs of lack of proper feeding, such as weight loss.

If someone recognizes these signs on an elderly, he/ she should approach the senior and help to admit the problem. The majority of seniors, who are abused, need time, until they find the courage to open up and ask for help.