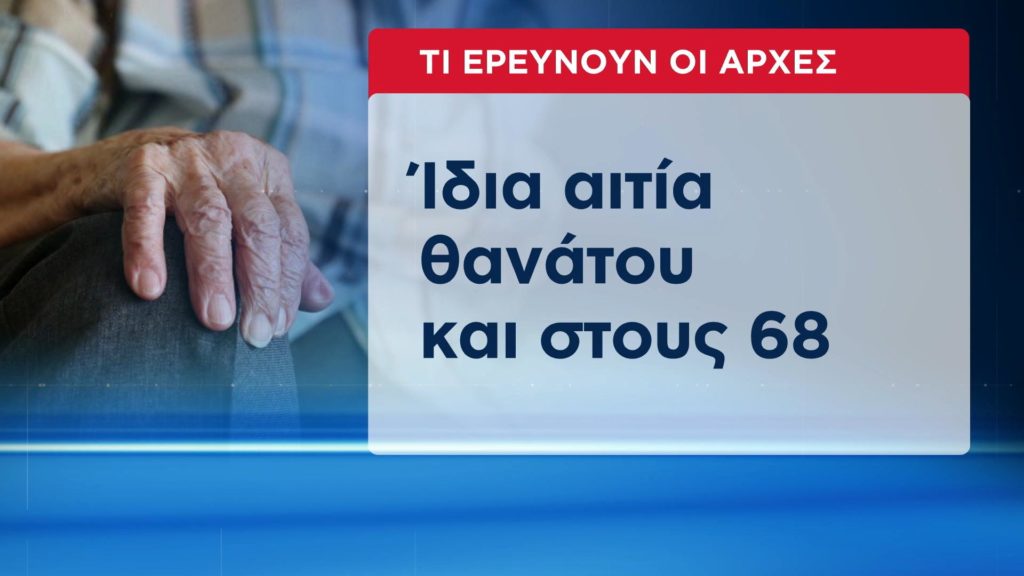 The society of Crete and not only, is upset from the complaints that came to light for the strange deaths of old people in a nursing home in Chania.
Share

Seventy-three deaths have been recorded in this nursing home over a period of thirteen months. All death certificates have been issued by the same doctor and the main cause is heart failure.

The investigation began after a lawsuit was filed against the nursing home by a lawyer who lost her elderly father, who had previously been hosted in this area. The lawsuit she filed to the prosecutor’s office was for exposure to danger.

According to information from “Tunnel”, she took her father there in good condition and when she went to see him three days later, she did not recognize him. She saw him tied to a wheelchair, with his head down, as if he had no contact with the environment.

When she asked the people in charge why he was not taken to the hospital, she got the answer that he did not face any problem. She called an ambulance to find out that her father had a high fever, something they had not noticed in the nursing home.

With her lawsuit and her request for the Registries to be investigated in all the Municipalities of Crete for strange deaths in the same nursing home, the shocking number of elderly people died there, was revealed.

The Prosecutor’s Office of the Court of First Instance of Chania ordered a preliminary examination, with the question of investigating the commission of any criminal acts, such as forming and joining a criminal organization, exposure, bodily harm and intentional homicide, by omission consecutively.

The investigation of the Security of Chania shows that out of the seventy three elderly people who were hosted in the nursing home and lost their lives, twenty-four were from Chania. The cause of death was the same for everyone. Heart failure without further explanation.

The owners of the nursing home and their lawyers claim that all this is a plot and conspiracy against them, by employees who were fired because they did not do their job properly.

On Thursday, April 22, the Prosecutor’s Office decided to order the exhumation of an elderly woman in Chania. The reason was the deposition of a former employee of the structure in the Authorities. The cause of death was again the heart failure for the specific woman, however there was the claim that she had a blow to the head. The exhumation several months after her death did not reportedly show bone injuries.

The nursing home has been operating for ten years. In 2010, the then Prefect of Chania, Grigoris Archontakis, ordered the nursing home to be sealed, as no operating license had been granted due to urban planning violations. As a result, in 2015, those responsible were convicted of non-compliance with the sealing decision. The structure was licensed in 2012, after settling the urban planning violations.

Medical examiners speaking in the “Tunnel”, characterize as unacceptable the fact that a doctor states in the death certificate as the cause of heart failure, without a reason. Heart failure is the result, as there are dozens of reasons that can cause it.

The doctor must state the three possible causes on the death certificate, depending on the patient’s medical history. This is the procedure laid down in a European Union directive.

It is important to clarify that heart failure warns of symptoms. The questions that need to be answered are whether the elderly were taking heart medication in the right dosage…

On March 22, the sanitary department raided the nursing home but no violation was found.