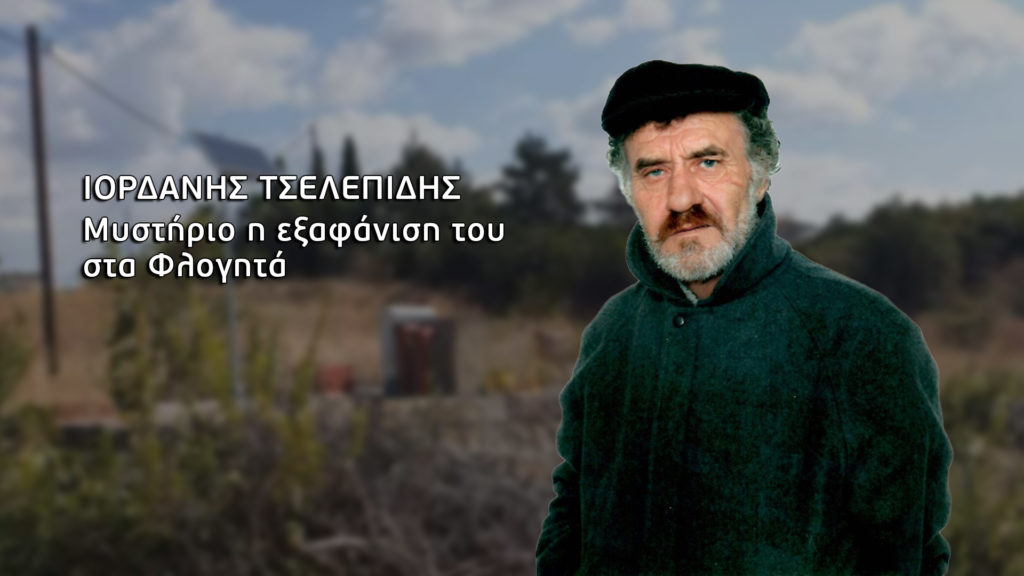 A new mystery case is revealed in Flogita of Halkidiki.
Share

A resident of the area is missing, whose traces were lost in August, in the middle of the tourist season.

He is Iordanis Tselepidis, 74 years old, who has been missing since the morning of Sunday, August 29, 2021.

Chilling is the message he conveyed to his brother who was looking for him.

When he asked him where he was, Iordanis managed to whisper into his mobile phone with a trembling voice “here, here…”. Then everything went silent…

He seems to have been outside and his voice was barely audible.

“The sound I heard reminded me of reeds and dry grass, on which someone was crawling,” the brother told The Tunnel.

His cell phone seems to have been switched off in the wider Flogito area, within a radius of ten kilometers.

The investigations carried out by OFKATH volunteers, Silver Alert and police officers, were unsuccessful.

The missing person had mobility problems and had a characteristically slow walk. He would hardly be able to travel long distances on his own without someone transporting him in a vehicle.

His two brothers, who spoke to “Tunel”, claim that Iordanis kept going to the woman with whom he had a relationship in the past, but she kicked him out and they fought.

“The people closest to him are me, some of his friends and this girl. Not saying she did something herself, because anything could have happened to him,” said his brother.

“From what he told me, the police went and found her. I always found him there when he was gone. I also asked the neighborhood, but no one saw him. She sold a field, ate the money with her, and when it was gone, she finished him off too. I was trying my best to advise him, but it was bothering him. They would often fight and I would go and pick him up from there. Once he came back with a mark on his neck,” he added.

“My mind went to his girlfriend first, because she used to go there. She kicked him out every time he visited her. He was in love with her and sought to see her,” his sister told The Tunnel.

“The police were looking for him in my closet…”

The TV crew of “Tunnel” located and spoke with the woman with whom the missing man had a relationship some years before his tracks were lost. Wanting to remain anonymous, she referred to the relationship between them, but also to when was the last time she saw him.

“I also know what happened… He was coming from the house, he was bothering me and I was kicking him out. They also came from the police and searched for him even in the closets, but I wouldn’t hide Jordan…”

“I heard sounds of dry grass as if he was crawling…”

The brother and sister of the missing man spoke to the reporter of the show about what they believe has happened to him, about the investigations, but also about the chilling moment when they heard him on the phone whispering his last words, before the earth opened up and swallows

“I had a great weakness for him. He was a good man, soul. I think something bad has happened to him. Maybe he got hit by a car and disappeared or something happened with that girlfriend of his… Specially trained dogs and volunteers came to look for him. They searched everywhere, in fields, in houses, but nothing, as if the earth had opened and swallowed him. All we want is to find him, whatever he may be, to do the right thing. It’s been a year and we’re still waiting… I shut myself in, I can’t go out of the house.”

Lazarus, the missing man’s brother, who lived in the same house, told “Tunel”:

“He left in the morning that August day and he didn’t usually tell us where he was going. I called him several times and got worried at night when he didn’t answer my calls. The next afternoon he picked up the phone and answered. I asked him where he was and he answered me exhausted, in a whisper and trembling voice:

I heard sounds of grasses, of reeds, as if it were crawling somewhere. Then I called him again and his cell phone was off. Anyone who knows something, to speak so that we can find him anyway, to find out what happened”, he concluded.

“How did he get lost with so many people here?”

Anastasia Tzohounidou, niece of the missing Iordanis Tselepidis, spoke from Flogita where she lived, about the investigations that were carried out in the wider area, but also about the testimonies that exist.

“There were too many people because it was August and the area is touristy. We focused our searches on the main road to the beach. It’s a downhill that quite a few people have seen him there. One testimony states that he was there at night. There are cameras, the footage was checked by the Police, but it doesn’t seem like they recorded him. We searched all the ways he could have made his walk to the sea, but nothing. Investigations were also carried out in another spot, called a hill. He has some galleries there, where the children used to play and the testimonies say that someone saw him from there. He was facing mobility problems and when he wanted to go somewhere further away, he was transported with his brother,” said Anastasia.

What did the last witness see…

The niece of the missing man, Anastasia, was mentioned in the investigations and in the last testimony of a resident of the area.

“Because his cell phone was old, the police were able to determine his location in the radius from Flogita, to Mouries Dionysiou and from Flogita to Nea Plagia. There was a sound coming from the phone, something like reeds. “Both places in the area where there are reeds were searched, but to no avail,” he told “Tunnel”.

The witness who last saw him spoke to the show.

“I saw him on Sunday at 19:30 when I was riding my motorbike and I greeted him. I believe it would go down towards the sea. Especially on that day it was very crowded. What can I say, this is not explained. Did he take a bus, did he leave or did someone take him to go somewhere else?”, said the witness.

His niece wanted to make an appeal through the show.

“It is a pity, a sin for a man. There is a soul. It’s good for his own people to calm down, that he appears, that we find something, that everything goes as it should.”

The missing person is 1.67 tall and has blue-green eyes.