"Tunnel" on the first show of the year, revealed an important new evidence which turns elsewhere the scenarios of Agrafiotou murder.
Share

Angeliki Nikolouli managed to get into the spot where the unfortunate woman trapped and brutally murdered.
Searching inch by inch the mystery basement in Maroussi, the researcher with the help of the broadcast camera found  the “sign” of the killer …
The new information revealed by the journalist, shows  that the perpetrator knew the area and had easy access to an unseen for most of the people  emergency exit, from which he escaped.
It is a door on the ground floor leading to the exterior of the building, where there were not at the time security cameras nor  alarm.
Important detail: The door can be opened from the inside, but from the outside can open only with keys.
After research of the show, it was found that the keys are kept in Maroussi Municipality and the office of the owner of the building.
Almost nine months after the brutal murder of 69 year old woman with the perpetrator remain unknown, the journalist searched the third basement garage and the staircase, and her camera was her irrefutable witness.
The traces left behind by the maniac actor, revived the horror…

All showed that the killer knew very well the building site. He easily trapped his victim inside the dark stairwell which the store employees were not using.
He knew that the electrical panel supplied power to the third basement along with the staircase was not in function at the time.

He surprised Agrafiotou in second basement where she had just parked her car and dragged her through the stairwell. Blood traces and the palm print of the woman, testified that she tried to defend herself and escape to the upper level, within the insulated stairwell.
He hit her, tried to rape her on the landing of the second basement. There were found her underwear, her scarf and her pants. The woman as showing the traces resisted once again and as a result he hit her head on the wall and with kicks threw  her down the stairs, on the floor of the third basement, always moving in the enclosed space of the stairwell.
Then undisturbed as “Tunnel” ‘s  research revealed, he left the emergency exit in the same area.

In the studio were the Head of the Forensic Service of Piraeus Mr. Elias Bogiokas and the coroner – Medical doctor Mr. Socrates Tsantiris.
Experienced scientists analyzed with the journalist the unknown aspects of the horrific crime in an attempt to unite the missing pieces from the final image that will lead to the arrest of the perpetrator.
The unfortunate woman received escalating blows and suffered strong force exercise. Something that is clear from the many fractures in her body and especially on the top of her head.
The chronicle of the disappearance and “Tunnel” ‘s first revelation.

Eleftheria Agrafiotou  69 year old, from Neo Heraklion, was lost on Thursday, April 21, 2016 with her car, a white Opel Corsa.
Twenty-two days later, during the live show an employee from Maroussi store, said that at the second level of the underground garage was a car that matched with the car of the missing. The next day, on Saturday, May 14, the car was found. But no one then thought to investigate the site.
A few days later on  May 25, the corpse of Eleftheria Agrafiotou detected in advanced sepsis in the same building where the show found her car! 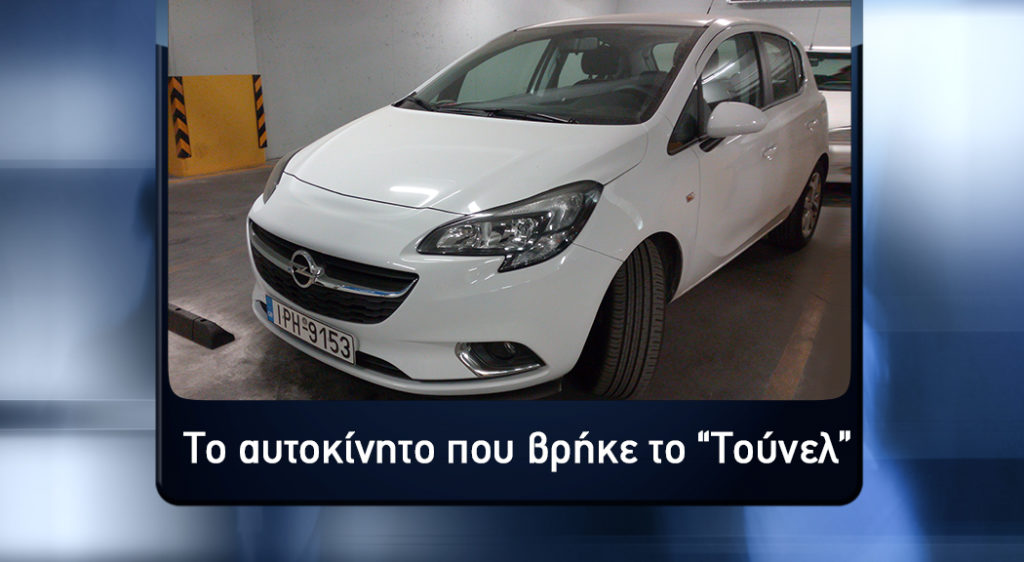 Evidence  “talk” to “Tunnel” ‘s  camera
Employees of the municipality of Maroussi and a representative of the store located in the same building who had  shift the day the corpse of the unfortunate Eleftheria Agrafiotou was found accompanied the journalist.  As he explained at the time the third basement garage was closed to the public and at the automobile ramp was a  chain that prevented access. But many used to take off the chain and park there.
The strong stench that was coming from the dark garage, forced them to search it, the evening of May 25, 2016. A team of four store employees, decided to go down to the basement with two lenses to determine the cause of the odor.
As they approached the side of the staircase that was not functioned until then, they found that smelled strongly. At first they did not notice anything special in darkness, nor suspicious signs on the walls.
Once they opened the door holding  the little light of the lens, they saw the macabre spectacle. The corpse was fallen in front of the staircase. Everywhere there was blood that had been spread on the floor of the staircase and reached up to the door leading to the third garage.
The journalist recorded with the camera the space. The horror was present, alive. A lock of hair  of the 69 year old  woman is still stuck on the wall …

“Tunnel” finds the “sign” of the killer
Angeliki Nikolouli searched inch by inch the mystery garage. With the camera she recorded all the areas around the site wher the unlucky woman was  found dead. The journalist in a representation, animated the same scene that existed then. The fire door from the garage to the small staircase which was not in use, was ajar. A little further inside there was another door closed, leading to an inactive elevator for the  building apartments, a small storage room and a staircase that functions as an emergency exit. 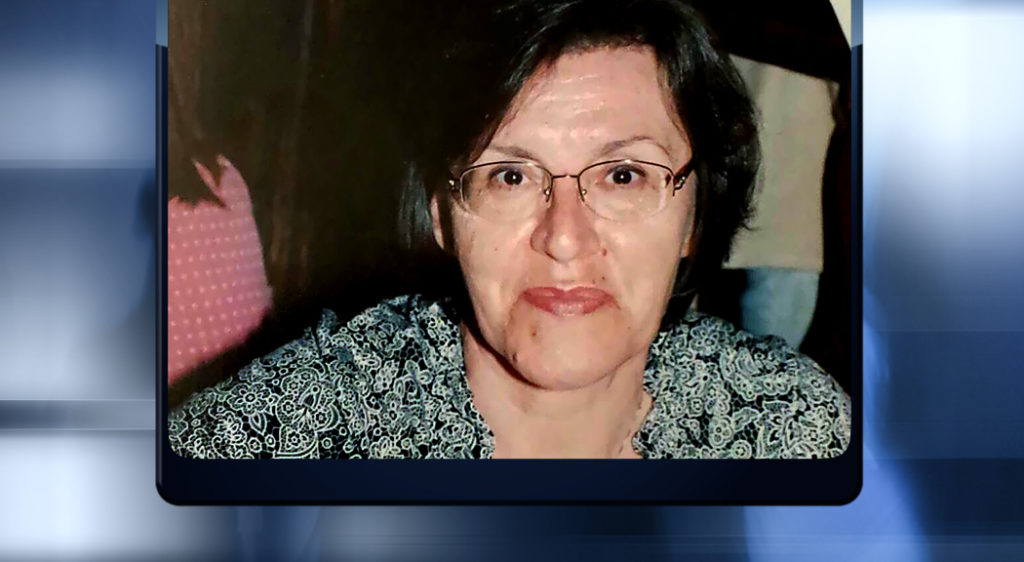 At this point, behind the second door, was found the half-naked corpse of the unfortunate woman in a pool of blood.
The staircase which acts as an emergency exit connects the three underground garages. Everything indicates that the offender pulled the woman in the stairwell of the second basement where she  was parked.
The journalist wondered where this ladder ending and went upstairs  with  the camera. She arrived on the ground floor. She pushed the door located at the point, and  found amazed that leads out of the building.
This exit is covered by plants and is considered as an excellent escape point for the offender, since it had no security camera, nor alarm.

“Tunnel” ’s  radiography at the crime scene…
In the autopsy conducted by the journalist at the  space, were investigated the visible exits from the third basement garage. These points were the ramp from where the cars come and go, the elevator and the staircase leading to the shop are located diagonally opposite the staircase which became the tomb of Eleftheria. This  elevator is connected with the second  garage and at the time was functioning. In these was  not found any  remarkable finding. After the murder of Agrafiotou  the access with elevator to the third basement closed.
The perpetrator knew the place and it seems that he did not use these points to get into the basement.
He moved straight to the staircase that connects with the other two basements . This route is unknown even to employees in the store.
Today the third basement that has passed into the jurisdiction of the shop, has light , security cameras and alarm.
Angeliki Nikolouli asked an employee of the store for a customer, a BMW car  driver. The witness had complained to security men of the store terrified, that in this dark basement that period, a suspect male suspect had moved aggressively toward her. She described him as a bald man with a sick wild look. The incident happened about three months before Agrafiotou was found dead. According to the employee of the store this woman did not appear again. 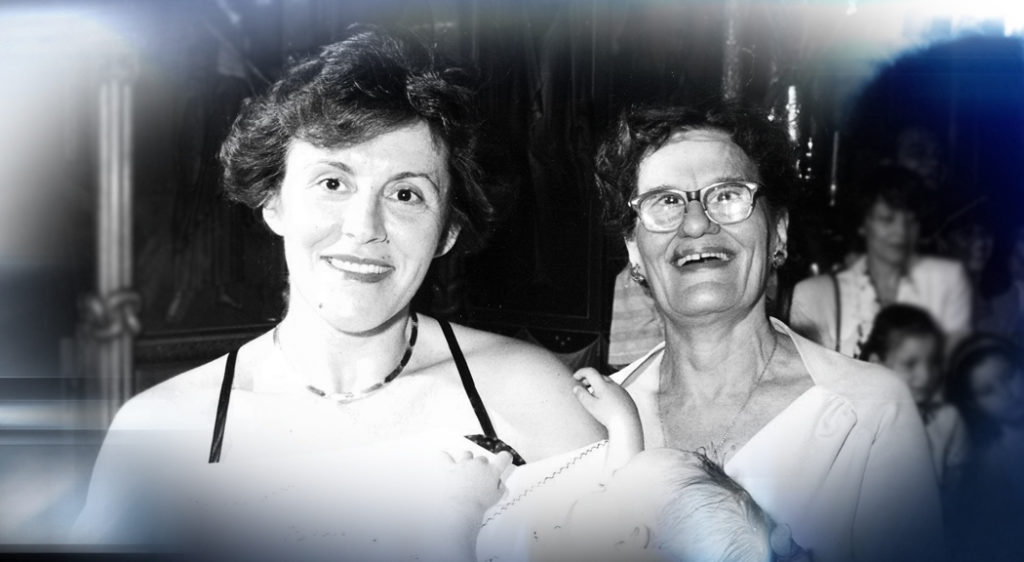 “Tunnel” found the spot from where the killer escaped.

After the autopsy carried out on site stained with the blood of the unfortunate woman, Angeliki Nikolouli continued thorough research.
She found and spoke with the company representative foreign interests, which owns the apartments located in the same building where Agrafiotou was tragically killed.
As explained to the reporter, at the first floor are two apartments. The period the maniac killed the 69 year old woman, the apartments were not in operation and remain closed until today.
Not long ago the savage crime was committed , they had almost completed the constructions in the space. He claimed that at that time there were no workers, the keys were returned to the company and only the manufacturer and no one else had access to the apartments.
He clarified yet, that the elevator leading to the apartments and linked to the controversial underground garage, was not in use.
At a  question of the journalist who holds the key to the door which leads to the stairs of the staircase, he replied:
“As a company, we passed and officially handed over to the Municipality of Maroussi the third basement garage of the building as a donation.. We delivered all the keys, including those of this door that leads to the exit. ”
As also said to Angeliki Nikolouli sometime before the incident a man who was in charge of the shop informed him for some moisture problems which had occurred and needed rehabilitation. The company representative went then to see the problem himself. What was caused him impression was that the lights were turned off everywhere. He asked why there was no lighting and the response received was that or the City wanted to save costs, or someone cut the power!
“But is it possible, I wondered, such a donation and they leave the place in the dark?” he said to the reporter.
As he said after the news of the discovery of the corpse in the basement, they looked to see if the room had been broken into and out of the apartment, but did not find anything.
He believes there is a high probability that the offender escaped from the door of the staircase leading to the exterior of the building. 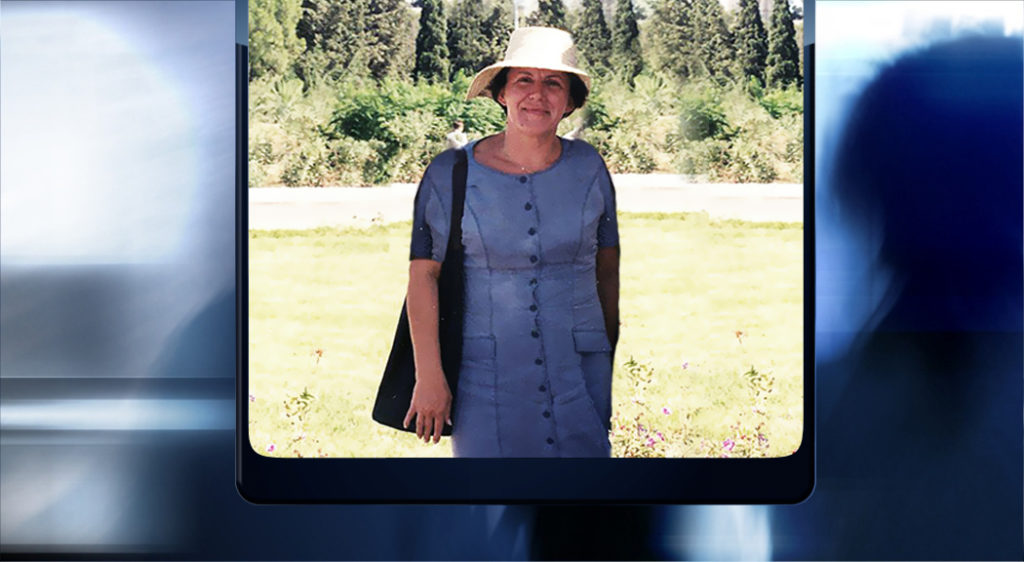 “Nobody earned anything  from what happened to my godmother …”
“I do not know if it was the perfect crime. The perpetrator was labeled or heavy mentally ill… “.
With these words, one of the closest people of the unfortunate Eleftheria, her godson Giorgos, is trying to give a logical explanation for this brutal murder.
“I went where she was killed to leave a flower. There was a pool of blood. It was a wild place.  I am trying to forget it. There was so dark, surely the offender knew the place. If there was another way of escape,  it must be investigated…”
At a relevant question of the journalist the godson of the victim replied: “We did not know that we could as relatives to define a technical advisor to the autopsy. The more heads involved, the better. It is good that you are searching again with the help of coroners… Find the murderer is not only to be vindicated my godmother, but keep inicent people out of danger… “.
He said to Angeliki Nikolouli that recently went to her grave to honor her memory. “I found a wreath of white flowers in a heart-shaped hanging onto the grave cross. I could not think who could  leave it . It seemed strange. That’s why I am telling you about it… “.

See frame-by-frame all the developments and “Tunnel” ‘s deep research on the case here.