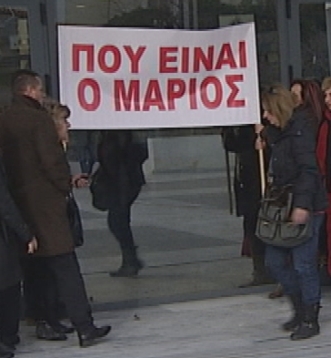 Catapult was the Attorney in her speech at the trial of the sensational case of abduction and murder of Marios Papageorgiou and the attempted abduction of his mother.
Share

On Tuesday, March 18th at the Mixed Jury Court of Athens, the prosecutor asked the guilt of the main accused Petros Michaleakos . She said that the alleged mastermind kidnapped , murdered and created a gang to blackmail the mother of Marios Papageorgiou .His purpose was to take the money she had in her possession. The judicial officer stressed that although the corpse of Marios Papageorgiou hasnt being found, the amount of blood that was found in the car thanks to the persistent research of Aggeliki Nikolouli and the geneticist Mr. Fitsialos argue the fact that Marios was murdered . Sole motive of the alleged brain according to the prosecutor for all these acts, was the money he knew Varvara Theodorakis had in her possession.

The prosecutor also suggested guilt for the wife of Petros Michaleakos for direct complicity in kidnapping and extortion . She featured this woman as the person who orchestrated from her house through phone calls all the actions of her husband and even managed to extract information from the family of Marios Papageorgiou .

Even suggested guilt for Anastasios Basantis who was led by the main accused to call Marios mother, to impersonate a kidnapper and demanded ransom .

The prosecutor even suggested the guilt of Aristidis Korentios and Tampakakis brothers , who allegedly were preparing the kidnapping of Marios mother. She proposed discharge of Panagiotis Chaikalis and Eugenia Tampakaki due to lack of evidence .

What prosecution and defense said

The lawyers of Marios agreed with the proposal of the Prosecutor for the main accused. For his wife, said he could be blamed for simple and abetting murder as it considers that she had played a role in the murder of Marios. The lawyers of the family of left spikes for policemen sons of Petros Michaleakos, if they were involved in the case. The civil suit also argued that apart from the physical murder of Marios, now they murdered his personality.

Counsel of Petros Michaleakos in his speech said that his client may be an unpopular man and needs medical attention , but it wasnt prove during the hearing that he kidnapped and killed Marios because his bodynever was found. He referred to the publicity of the case and denied that the blood that was found in the car of the 26-year old , constitutes a charge of murder.

Counsel of Voula Sioutalou , wife of the main accused , argued that it was simply a housewife who lived in the shadow of her husband and would not act violative .

The defense lawyers of Anastasios Basanti reported that their client had great obligation towards Petros Michaleakos . They said he managed to convince him that it was not such a serious case , but a simple enslavement . They stressed that just he was released he helped with his testimony and the wife of PetrosMichaleakos was arrested.

The lawyer of Aristidis Korentios argued that his client naively believed the main accused who used him and trap him . The lawyer of Korentios wife Eugenia Tampakaki , told the court that she knew nothing about the case.

Counsel of brothers Gerasimos and Vasilis Tampakakis, argued that his clients as addicts were not aware of the seriousness and the only thing they were interested in was to save a little money to buy substances.

Finally , the lawyer of Panagiotis Chaikalis said his client was never involved , which proved as he did not wish to participate in the preparation and attempted kidnapping of Varvara Theodorakis.

At noon on Friday, March 21st , the President of the Second Mixed Jury Court of Athens , is expected to announce its decision on the defendants .