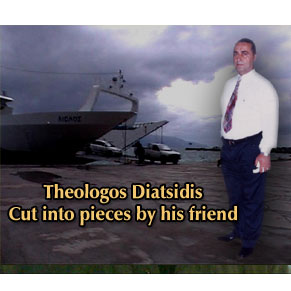 Their ‘weapon’ is a very expensive gold detector and their goal is to locate the treasures that citizens and Germans had hidden, during the difficult years of war and German occupation. In this ‘world’ the 60 year-old employee of municipality of Athens, Theologos Diatsidis had been trapped. On Friday November 30th, Diatsidis went to Oropos with his friend’s, Antonis Adamidis, car. Adamidis told the relatives of the missing person who were looking for him, that he saw him embarking in a blue car with two people inside, at the pier of Scala Oropos. He claimed that he was waiting for him so as to return together to Athens in the afternoon but Diatsidis did not appear. The TV show ‘Fos sto Tunnel’ tried to find him but he refused to speak. During the broadcast, he got surprised by the phone call of the journalist and talked live on air, thereby he fell into contradictions and turned off his phone trying not to answer questions that had emerged, mainly the most basic question: What was he doing at the Hospital (KAT) on Friday night when his friend disappeared. As revealed at ‘Tunnel’ by witnesses, he was slightly injured while chopping his victim. The day after the broadcast, the Prosecutor ordered immediate preliminary investigation. The suspect panicked by the questions of journalist Angeliki Nikolouli, he felt the need to hide and a few hours after the show he surrendered to the police and confessed his horrible crime. In his country house at Oropos he shot and killed Diatsidis due to financial differences and above all due to a scam that allegedly had been set up against him. Then he cut his victim’s body into pieces, put it into bags and threw it down the drain in the estate. First instance, sentenced to imprisonment for 19, 5 years.