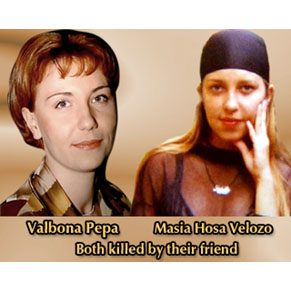 Two friends, 29 year- old Valbona Pepa from Albania and 20 year- old Masia- Hoza Velozo di Menezis from Brazil, mother of a minor girl, disappeared from Skala Polychnitou of Mytilene on August 2nd 2002. They had been to the island for vacation and there they would meet Valbona’s friend, Stelio Fteriano who lived there. The day they disappeared, the friend said that he left them at the center of the island where they had a date. He claimed that they would leave with a friend’s boat for Chios. Their personal belongings and Valbona’s cell phone were all found in their room. The show travelled to Mytilene and surprised Fterianos by gathering all necessary information that proved him guilty. His extreme contradictions, his anxiety, his mysterious moves and his audacity, convinced Angeliki Nikolouli that he was responsible for the death of the two women and that he was acting. The night of the show, it was revealed that in the past he was arrested in Athens because he was taking advantage of foreign women. He was keeping them locked in an apartment and was threatening them with a gun. Both the police in Mytilene and Athens didn’t know that basic information that proved his criminal action. That same night that he was on telephone communication with the show, he was trapped in the questions of the journalist and his lies were brought to surface. He was then arrested and led to Athens where he admitted his action after many hours of questioning. He confessed that he killed the two women because they rejected him sexually and they were making fun of him. He took them at a sea- side area with many streams and got rid of their bodies. Afterwards he changed his confession and said he didn’t know anything about them. Angeliki Nikolouli had mentioned the police about the scenery of the double murder, long before the suspect’s confession! He received lifetime sentence. The bodies of the two young women were never found.