The teenager from Thessaloniki who was searched by the "Smile of the Child" found dead.
Share

The body of Alexandros Tannides, 17 years old, was found nine days after his disappearance by an employee of the Papanikolaou Hospital.

It was found between high heights two meters away from the inner enclosure of the courtyard.

His body was recognized by his sister who was looking for him. The coroner who examined the body appointed the time of death between twelve hours and two days.

According to the authorities’ first estimates, criminal activity has been ruled out and its death is due to pathological causes or suicide.

The young man was hospitalized in the pediatric psychiatric clinic of the same hospital. He went missing  on Wednesday, February 21st.

His appeal to Angeliki

What he posted on his personal Facebook page just before disappearing, it is shocking. 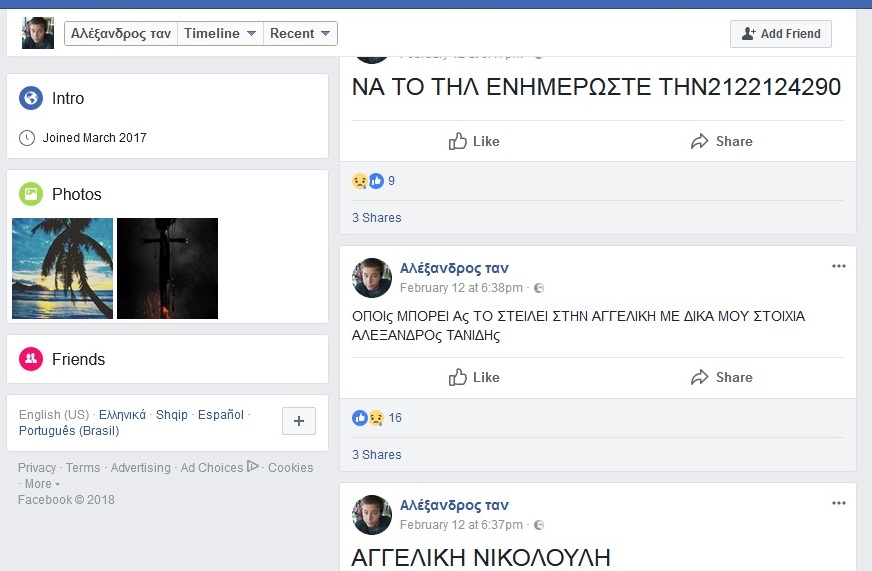 He wanted to be transferred to the Papafio Foundation and not to the psychiatric clinics where they sent him. Both his younger siblings are in an institution. His voice of despair unfortunately reached  the journalist several days after his disappearance.

Giannopoulos: They throw the children in Kaiadas

In his telephone conversation with Tunnel, the president of “Smile of the Child” said:
“I would like to mention this child’s memory, the inconvenience he has suffered all these years along with his siblings who are being thrown at an institution. When he disappeared from the psychiatric clinic where he was hospitalized, no one informed the “Smile of the Child”. A friend of his sister after four days called us. We asked the police to inform the public prosecutor remove the confidentiality, as in these cases we must have the consent of the parents. There was no move and I had personally to call the Prosecutor of Minors, who gave the order to issue Ambert Alert.
His appeal, as revealed later in Angeliki Nikolouli, was something shocking. It was a cry of anguish.
We have unfortunately found other children dead because there was not the mobilization.
These children have nothing but that some have afflicted them, tortured them, and all they ask for is help.
If a  child disappears, we first inform the police and immediately we must call 116000, the European Line for Missing Children. We are informing about the disappearance details  as soon as possible so that the mobilization can be made directly with the special   team.