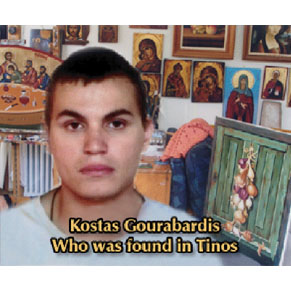 On Friday, November 13th of 2009 and a fascinating 'Tunnel' opened its gates to the viewers.
Share

A young, 23 year-old musician and student of medicine school in Glyfada, went suddenly missing, shocked by the health problem he was facing. It’s Kostas Gourabardis who was gradually loosing the most important human sense: his vision. On Monday, November 9th he left from his house in Ano Glyfada to go for a walk and never came back. During the live broadcast, viewers from Tinos gave information about Kostas, that they had seen him at the island of Holy Mary, trying to survive. Late at night, they spotted him being exhausted and informed his relatives who stood by his side.