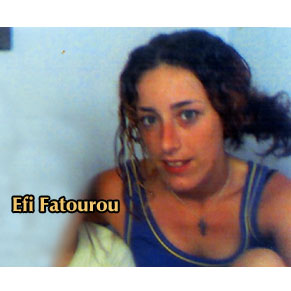 On Friday 23rd of November 2007, the show revealed the people who killed Efi Fatourou, 25 years old from Preveza.
Share

Her body was found devoured from wild animals in Liagkeika of Agrinio near the point that her motorcycle was found one month earlier. She was not found by the numerous special investigators who were looking everywhere for her but by a shepherd! Her friend who was ‘trapped’ in ‘Tunnel’, his brother, her friend and one more guy, were remanded in custody accused of the murder and not for other crimes committed against her. That’s why they were claimed innocent by the court. Her friend had testified everything that happened at that deserted area on August 2007. He accused his brother of having her sexually abused after he gave her drugs. After that, she fell into coma – some others claimed that she died – and threw her body to a discreet place. After that, they started lying to everyone about her whereabouts. Her friend claimed that he was hiding along with Efi from his brother who threatened them. They fooled the Authorities, local society but not ‘Fos sto Tunnel’. The methodical and compelling investigation of the program opened the door to find the edge. It was proved that Efi didn’t go away with another man, as her friends claimed. ‘Tunnel’ showed unknown details from backstage and conversations with this guilty bunch of people. On Friday 16th of November, ‘Tunnel’ managed to break the silence and find the truth about Efi’s whereabouts. It was a shocking episode which opened the path for their arrest. But afterwards, Authorities did fatal mistakes, according to experienced lawyers, which led to their innocence by court.