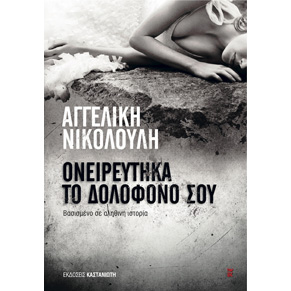 This is, my friends, my book that is going to be released on July 2nd by Kastaniotis editions. It is a romantic, detective novel. A few words about the story
Share

A young and beautiful girl disappears into thin air. In the small provincial town, police and locals believe that she took the wrong way, the way of earning easy money. A journalist-researcher departs immediately for the trip of the pursuit. Guided by intuition, she starts from a bizarre dream and later on an incredible revelation comes to her. She slips in a maze full of suspects, where everyone accuses each other and altogether at the same time compose a peculiar story with puzzles and riddles. She pursuits the guilty from his signs, playing cat and mouse. A weird connection ties her with the perpetrator. The show seems to be endless.

A town of mystery, with people who prefer to be tersed, even though they seem to be aware of many facts. A hidden diary, with sins of the past and prophecies for the future. Intrigues, loves and passions in a tense, cinematic rhythm, while the suspense keeps growing.

An exciting adventure, a thrilling story that only real life can produce.

Based on a true story