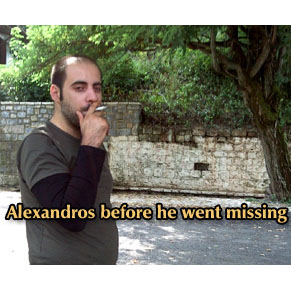 On Friday, October 16th of 2009, 'Tunnel' made a research on a shocking case. After 27 years, Angeliki Nikolouli dealt once more with the tragedy that shocked Greece.
Share

For that case, she had made a research while she was a young reporter in ‘Apogevmatini’. The 4 year-old boy of policeman Christos Kolitsopoulos and Katia, his wife who set him an ambush of death, Alexandros is missing. The scenes of the violent murder of his father from the lover of his mother were never erased all those years from his eyes and soul. Policeman Christos Kolitsopoulos was holding the little boy in his arms and opened the door of his apartment at Alketa street in Pagrati, without knowing that behind it his killer was hidden. The blood from the stabs in his throat covered the face of the child who saw his father lying dead on the floor. When he grew up, he found out the truth, that his own mother was the moral perpetrator of his father’s murder. That Saturday night, on November 6th of 1982, she stayed a little longer at a store in the neighborhood and sent her husband and her child to the place of the massacre. Her behavior before her husband’s funeral and the interview she gave to Angeliki Nikolouli who spotted her at a relative’ s house before the police found her, shed light to the case and the violent crime was investigated. She and her lover Giannis Sgouridis were sentenced to lifetime imprisonment but 15 years later they were set free because of good behavior. This shocked Alexandros even more and stopped him from going to America for studies. The events that followed, marked his sensitive soul.
On October 2nd of 2009, Alexandros Kolitsopoulos aged 31, had been to him father hometown in Arkadia so as to vote for the national elections. He disappeared in front of his aunt’s eyes who had become his mother. It is possible that he has put an end in his life. 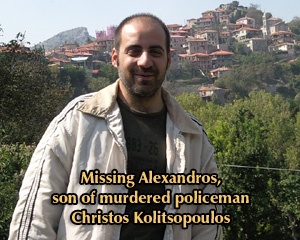