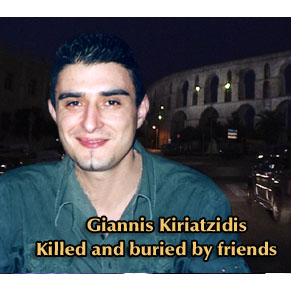 The bell of Justice rang loudly for the second murderer as well of the young Greek of Germany, the 34-year-old John Kyriatzidi.
Share

The Mixed Jury Court of the city of Drama, condemned to life imprisonment, Eugene who was trapped during the Tunnel show by his own contradictions. After the shows revelations, about the murder of John in the area of Kavala by a three-member group of friends, Eugene managed to flee to Germany. Instantly Interpol issued a Red Notice and after some years Eugene was arrested during a police control at the airport of Madrid. Afterwards began the process of Eugenes extradition.

As it was proven in Court, Eugene was the one who struck the first bloody blow against the poor man and the others came after. The third person of this murderous gang, Antony, is still on the loose and Interpol is looking for him as he escaped abroad. [details in the section Murders to Light].