The new detective thriller of Angeliki Nikolouli is released from Kastaniotis Publications.

Based on a true story, follows the killer with the many faces between light and darkness, terror and passion, until his punishment … 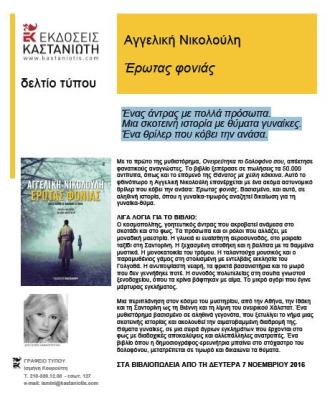 A man with many faces.

A dark story with women victims.

With her first novel, Dreaming your killer, she earned fanatic readers. The book sales surpassed 50,000 copies like the following Death with red lips.

Also based on a true story, where the woman-Punisher seeking vindication for female victims.

The cosmopolitan, charming man who balances between the darkness and light. The roles he is pretending , with unique mastery.

The sweet and sensitive hostess in a fatal trip to Santorini. The forgotten warehouse and the suitcase with the buried secrets. The house of horror.

The talented musician and the fairy tale wedding in the decorated with edelweiss Church Calvary.

The unsuspected young woman, the horrible torture and a baby that was never born.

The VIP escort in a suite of a well known hotel, where the lilies were stained with blood. The little boy became a crime witness.

Delves into the world of mystery, from Athens, to Ithaca and Santorini and from Vienna to the dreaming Hallstatt lake.

One novel based on true events, unfolding a thread dark story and follows the bloody trail.

Women victims, in a series of wild crimes that come to light with successive revelations and repeated reversals.

One book where the journalist-researcher becomes a target for the Killer and finally turns into a punisher who is seeking justice for the victims.

IN BOOKSTORES FROM MONDAY 7 NOVEMBER 2016