The new data that came forward for the first time in the thriller of the breeder from Thessaloniki, link the lost pieces of the macabre puzzle.
Share

According to important information that arrived to Angeliki Nikolouli, Dimitris Graikos the night before disappearing was in great tense.

He visited a man who trusted and handed him burning data that involved his financial transactions. He was upset and declared determined to finish his business with someone he named, who owed him a considerable sum of money. The next day, he disappeared from the face of the earth…

The investigation by Angeliki Nikolouli has brought to light another important data. Dimitris Graikos kept notes in a notebook with details of his financial transactions, underlined in some places with a black marker.

This handwritten document has already been handed over to the Authorities and illuminates many dark points of this strange case.

The legal representative of the siblings of the businessman Nikos Dialinas, who was found in  Tunnel’s  studio on Friday 9 March, said:

“These are very serious data  that are easy to identify by experts. Perhaps what Graikos has noted, give us the basics: The perpetrator, the place and the motivation …

With the family we continue to look for the truth. After searching the rivers in the area, the spare pens, a new survey will start in stables, with a special metal detector we brought from Germany to locate the car, “he said.

Queries are raised by the testimonies that arrived on the show about foreign workers of a specific unit in the area. These workers left  the country immediately after the disappearance of the entrepreneur. Their relatives who were allegedly working in slaughterhouses were also lost during the same period.

Tunnel found another key witness who spoke about the disputed afternoon of the disappearance. The truck driver said he met with the trader who Graikos followed with his car when they left the slaughterhouses. He found him in his stable and unloaded the dirt.

“I carried dirt in the stable after the slaughterhouses …”


The truck arrived at the trader’s premises around six o’clock in the afternoon.
“The owner of the stable arrived the same time I went. I gave him the dirt, we talked for about twenty minutes and around six and twenty to six and a half, I left, “he said to ” Tunnel “.
He claimed he learned about the disappearance of Graikos after several days when he went to the Police to testify.
As he said he does not remember if someone else was at  the stable that afternoon except for the landlord.


“He is a family man who only deals with his work. It just happened to be the last one who saw Graikos” he said.

He left right after Graikos disappeared

According to what the witness told “Tunnel”, a Romanian who was working in the merchant’s barn who met with Graikos before disappearance  rented a house in Anatoliko region. Immediately after the farmer ‘s loss, this man left  his house and left the country.
“He went to Romania with his wife because he said he was ill. Soon after, a cousin of his  came to Greece from Romania and got a job at the merchant’s premises. Now, what relationship they have, investigate it, “the witness said.

“Drives me crazy when  I hear that  I owed him money …”
Aggeliki Nikolouli, who has persistently investigating  the case of the farmer in Thessaloniki, once again contacted the man who followed the missing person with his car before got lost.
The trader categorically denied the information that he owed Graikos money.
“As I told you before, there are invoices and checks before disappearing, I testified about everything. I gave him more cash. It drives me crazy when I hear these things and everyone knows me here. Ask anyone and if you find out that I owe you one euro, then say whatever you want for me, ” was his answer.
He said he did not know Graikos well personally, only professionally. That afternoon when the farmer disappeared, leaving the slaughterhouse, went to his premises and met with a partner.
As he said, Romanian workers worked for him in the stable of, who they were staying in rooms inside the facility.
“They left after the loss of Graikos, when  the Police called them to testify. That made me wonder. They may have searched for them, I do not know, because some of the policemen  showed me pictures. There was another Romanian in the village and when the Police came he disappeared. They were relatives with others who worked in the slaughterhouses. All of them  disappeared, “he said.
He said that when his partner unloaded the dirt to the stable, he went to his house to rest.

“I also had Romanian working for me…”
According to what the merchant  told to Angeliki Nikolouli , Romanian who worked at the slaughterhouse, relatives of those who worked in his stable, were lost immediately after the disappearance of Graikos.
Tunnel contacted Savvas Tsopozidis, owner of the slaughterhouse, for further clarification.
He did not seem to know about some affinity between the workers of the two facilities.
As he said, one  Romanian was his permanent employee  and  another one an extraordinary basis.
He mentioned that the worker who worked permanently in the slaughterhouses was there at the time when Graikos disappeared and left Greece at the end of 2017.
“This particular worker had testified about the case, I do not know if the other went to the Police. None of my own foreign workers was suddenly lost. These people have been working in slaughterhouses for years, ” mr. Tsopozidis said.

“On the mountain you will find the car burned”
The profound research of Tunnel in the case of Dimitris Graikos has particularly sensitized viewers, who in an effort to help, communicate and provide relevant information.
One of them signaled an alarm. It  spoke for  a burned-out and scrawny agricultural car, which was on a mountain in the area where the businessman was lost. 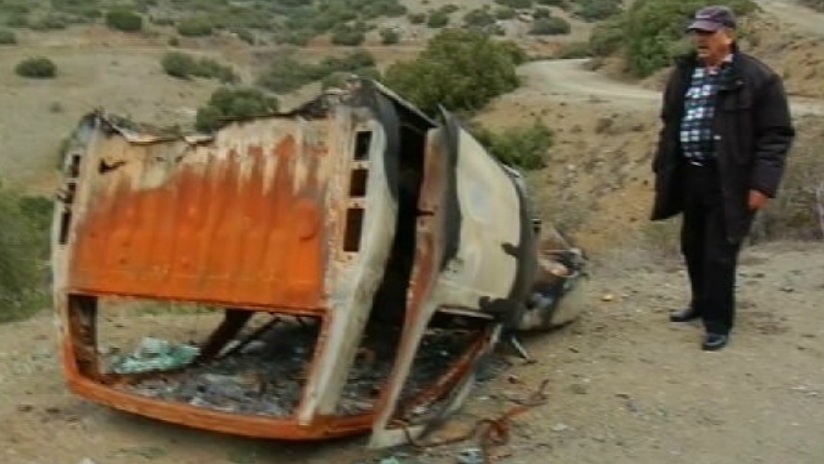 Tunnel came in contact with the missing person’s brother, informed him about it and, together with the broadcast reporter along  with a car mechanic, they started for the point indicated by the witness.
Following his instructions and with a  map in their hands, the small group arrived at the site, not far from the Graikos farmhouse.
At the end of the road, were the remnants of the damaged car, The engineer could not appreciate the vehicle’s brand, nor the color that had been altered by the fire. He only ruled that he had a single cabin.

Nikos Graikos at  first found common elements with his brother’s car.
The officers handling the case were immediately notified by the reporter of the show. After being informed in detail about the findings they said they knew about the particular wagon and that  they had investigated it.
Obviously frustrated Nikos Graikos said to “Tunnel”:
“Unfortunately it was not his car. Personally, I believe that what happened to my brother happened from the moment he left the slaughterhouses to Valdama. The merchant did not see him while he was following him … All this  happened for money ? We are not going to stop the research … “he concluded.

Watch frame-by-frame the research of “Tunnel” about the case here.