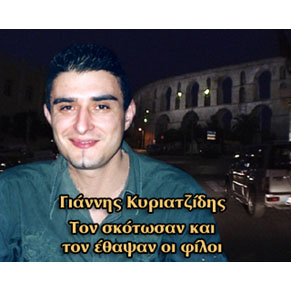 At the Court of Komotini after two postponements, took place the trial of the unfortunate Giannis Kiriatzidis who was murdered by his friends in Kavala in January 2007.
Share

The audience was surprised , when the court changed the imposed penalty in less years for the basic accused , causing frustration to the relatives of the victim.

The punishment of the offender or “grandfather” as he was known to friends, imprisonment for life remained as it was at first.

The other friend of the victim, Eugenios, who had fled to Germany where he was found from “Tunnel”, acquitted of charges of intentional homicide. First instance had imposed a life sentence for this category. The penalty is now converted into a total of 14 years for the categories of handles and violence.