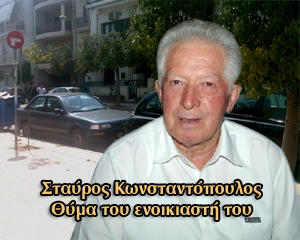 The Court did not recognize any mitigation for the tenant who killed his landlord and lived with his corpse for a whole year in Egaleo.
Share

The life imprisonment bell sounded for the second time in the ears of Yiannis Michalopoulos, who once more gave his own theatrical performance at the Joint Athens Court of Appeal on Thursday 11 January 2018. He did not hesitate to blame  as a killer of the unfortunate elder, one of his two sons!

Tunnel revealed this  shocking case after a persistent and methodical investigation.

The wild crime with victim  Stavros Konstantopoulos, a 77-year-old retired bus driver, took place on April 27, 2009. The “mistake” of the unfortunate elder was that he went to his house in Egaleo to receive the rents that owed him. His tenant strangled him, stacked him in a trunk in a warehouse near the drainage and threw colognes and bleach to vanish the smell!

The family of the unfortunate elder sought the help of  Tunnel for a trace of him because they thought he was missing. The show began the  research in the neighborhood of mystery.

The inconsistencies of the tenant were noticed by Angeliki Nikolouli from the very first moment. Everything seemed to indicate that this fatal morning something serious happened in the house and he knew more than he said.

As revealed later, he was the one who had transferred Konstantopoulos’ car to Iera Odos, where it was found abandoned.  Tunnel, with a methodical investigation, detected victims of frauds that he had made in the past, and then his criminal profile appeared. But the police could not bring the evidence together and reveal the horrible murder. And yet: police officers had searched the house three times and had not found the corpse in the trunk!

The tenant, in order to confuse the research, provided rent receipts that they  his landlord signed at their last meeting, and he left satisfied.

Tunnel sought the help of the special court graphologist, Mrs. Kambouri, who examined the receipts. It was clear from the script that Konstantopoulos, at the time was confused, probably under threat.

For one year the tenant and his friend stayed in the house of horror without any problem. He never let the journalist of the show inside the house and always spoke out of it.

The revelation of horror

The details that have become known are shocking.

The tenant forced Konstantopoulos to sign the last rent receipt without giving him any money and strangled him. Then he put a bag on his head, wrapped it on a carpet and tied it with wire. Then he stacked the “packet” between old objects in a storage room under the outer staircase of the house next to the kitchen!

A month later he saw that he could not get rid of the corpse. He did not have his own car, and the neighborhood after  “Tunnel” survey suspected him. Then he decided to complete his macabre work: He put Konstantopoulos’ body in a trunk, put rubbish on top of it and told his neighbors about protesting about the stench, he said it came from the cistern .

When he decided to leave the house at the end of April 2010, he did not carry the trunk with the macabre content, so that he would not be perceived by the carriers. He was thinking of returning home “with some gypsies,” as he said, to throw away the trash that had been left, something that Konstantopoulos’ son did not accept. In the presence of police officers he then forced him to hand him the keys of the house.

On Monday, November 29, 2010, the wife of the elder Maria Konstantopoulou, went at the house  to clean up and was faced with the horrible sight. Her husband’s body was in a trunk  in a locked warehouse. She could never recover from the shock and soon afterwards she died with the horror images imprinted on her mind and soul.

Two years later, after about a month of hearing, the Athens Joint Assize Court of First Instance first imposed the sentence of life imprisonment on the murderer of the landlord from Egaleo. The actor did not hesitate then to curse Konstantopoulos’ wife, who accidentally found his body in the trunk!