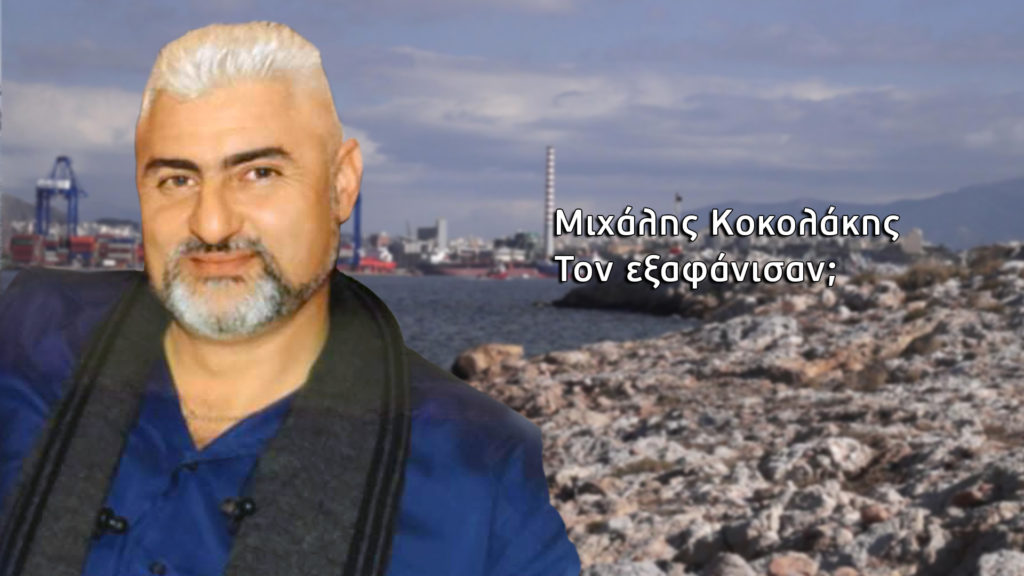 The "Tunnel" of Friday, January 21, dealt with the strange case of the disappearance of an experienced diver, "diving" in deep, turbid waters…
Share

A case that seems to have come out of a thriller and science fiction movie script.

Missing in the sea area of ​​Salamina, the diver Michalis Kokolakis 46 years old from Chania. He dived, as the port officials said, in a forbidden zone and they are looking to find out what really happened.

Many talk about a staged disappearance. That the diver had reasons to set up this whole story and emerge elsewhere with the help of some third party.

Some seem to have feared the search and threatened the diver’s relatives not to reach the “Tunnel”. The minor daughter of Michalis Kokolakis, against the threats, went in search of her father to find out the truth. At her side are her mother’s brother and her godmother.

The show did some in-depth research. In Chania, where he comes from, in Thessaloniki, where the eyewitnesses live – owner and captain of the boat that sailed and off Salamis, which hides the secret of his disappearance.

On Sunday, July 18, the missing person and two friends were in the sea area between Akros Kynosouras and the island of Psyttalia to try an underwater scooter, which he had bought a few days earlier. This image was given by the two friends who accompanied him on their boat.

According to their testimony, the diver dived at 15:40, telling them that he would emerge in 45 ‘, something that did not happen. They themselves were close to three hours late to inform the Port Authority, because they were looking as they said on their own.

Their testimony provoked a storm of reactions from the experts of the Coast Guard, who were on the set of the “Tunnel”. They considered that they did not say the real events that happened openly in Salamis. They stressed that this case is very serious and needs deeper investigation.

The instructor and diving supervisor of the diving work, Sakis Pras, brought to the studio of the show a scooter similar to that of the missing person and explained its function, but also how one can use it.

What did the captain say in “Tunnel”…

“Michalis and I have been friends for about two years. That day we went for a swim in Salamina with a friend of mine and Michalis wanted to try a scooter he had bought. We had an appointment in Perama at 11-12. Michalis was there earlier. He had the diving equipment on the boat from the previous day. Initially we tied up in the area where the church of Agios Spyridon is, but he did not want to dive. It fell at another point around 4 instead of 20. The weather was good with a little wave towards the afternoon. He picked the spot that fell randomly and told us to stop as soon as it was ready. We did not immediately worry because he had two bottles of oxygen with him and the scooter. “In the beginning we searched by ourselves and then we notified the port authority”, he stated characteristically.

“I do not know about the threats…”

Asked by the journalist if he had received threats, as he told the diver’s family, he replied:

“I do not know anything about threats. I do not remember telling the family that “Michalis betrayed us” as they say, but if I said that, what I meant was that we trusted him and he left or betrayed us because he suffered something bad… ”

The captain of the boat gave the following picture:

“With both bottles and the scooter he could go very far if he wanted to. If he had drowned, we would have found him with sonar. “We did research, but absolutely nothing was found, not even from his equipment.”

From an amateur video that the missing person had sent to his daughter and watched the “Tunnel”, it seemed that the two had known each other for a long time, after they had traveled together to the “troubled” Libya. As he clarified, they were there on a mission to deliver some boats…

“He may intentionally dove at that point…”

The owner of the boat said on the show:

“I met him in those days and we said to go to Salamina to see the place. I do not know if the choice of point was accidental, maybe it was intentionally dropped there. “A lot may have happened, everything is strange and we want to find out what happened and find Michalis,” he said.

“I do not believe the testimony of his friends…”

From the spot where the missing diver made the fatal dive, the “Tunnel” spoke with the man who dived a few hours later, in an attempt to locate him.

Christos Stamatiou, an experienced diver, was called by the port on the day of his disappearance to fall in the sea area of ​​Kinosura, Salamina. For two days he searched the seabed and along the coast, but to no avail.

He is sure that they were looking for something else and he was not there to try the scooter.

“I was impressed that at such a time they came to this point to test the submarine scooter. The place is a bit strange because it is a bus, many ships pass and it has several shipwrecks. I did what I had to do, as much as I could. Something did not stick to me in the whole story. They said she dived with two bottles, but I saw one on their boat and it looked used. Normally it is forbidden to dive here and you need a special permit. “All the scenarios are open, he may not have dived here at all,” he concluded.

“We were told to stop the investigation…”

The diver’s daughter, who with excessive courage and bravery, started the search to find out the truth in this strange story, said on the show:

“My dad was involved with the sea, boats, boats. In all the adventures he was inside. We have been looking for him for a long time. When we started the search, we received a strange phone call. We were told to stop. “It’s very ugly to want to find a person you adore with all your soul and be stopped that way.”

She also referred to the communication she had with the captain of the boat from which her father dived.

“I spoke to him, he told me things from his side about what happened that day. I asked him a lot, but he answered the same. I was not completely satisfied with his speech. I have idealized my father so much that I do not think he would die like that. We have done many scenarios, but to this day I can not understand what happened to him. “I believe very much in your show and that it will help us learn the truth,” he concluded.

Her godmother also spoke on the camera of “Tunnel” about the gaps in this story. She was also on the set of the show, asking key questions to the experts who attended.

“I’m afraid and I’m sorry for a lot in this case. Maybe he saw something and was scared or surprised. He would deliberately do nothing to make it disappear, I believe that. There are many gaps that no one can fill for me. “There are too many coincidences that make me worried”, he stressed, while appealing to anyone who knows something, to help to find their man.

“GPS was off at the time of the disappearance…”

The “Tunnel” in Chania that was found, talked to the little girl’s uncle, who supports her in this difficult effort.

“I am trying to help my 17-year-old niece. Her own initiative is to search, she wants to know about her father. Do not be left with questions about whether he is alive or lost… I feel obliged to help the situation “, stressed the brother-in-law of the missing person, while he also referred to some events that impressed him.

“For some reason I do not know, the boat’s GPS was off.”

“We were threatened not to continue the investigation…”

“In September I had started contacts with the show of Angeliki Nikolouli to find an edge in the whole story. A little later I received a phone call and they told me “stop what you start”. My niece and nephew had also received some strange phone calls telling them not to look. As if someone does not want us to know what happened. The captain himself had told me that he had also received threats in Athens. He claimed that Michalis used him because if he had drowned, he would have been found. “If Michalis lived somewhere and was well, he would do anything to communicate with his child,” he said on the show.

He also referred to the searches carried out on the boat from which he dived to do the dive.

“The boat he was on was searched and all his personal belongings were found there.”

Michalis Kokolakis has a height of 1.92, gray hair and dark brown eyes.