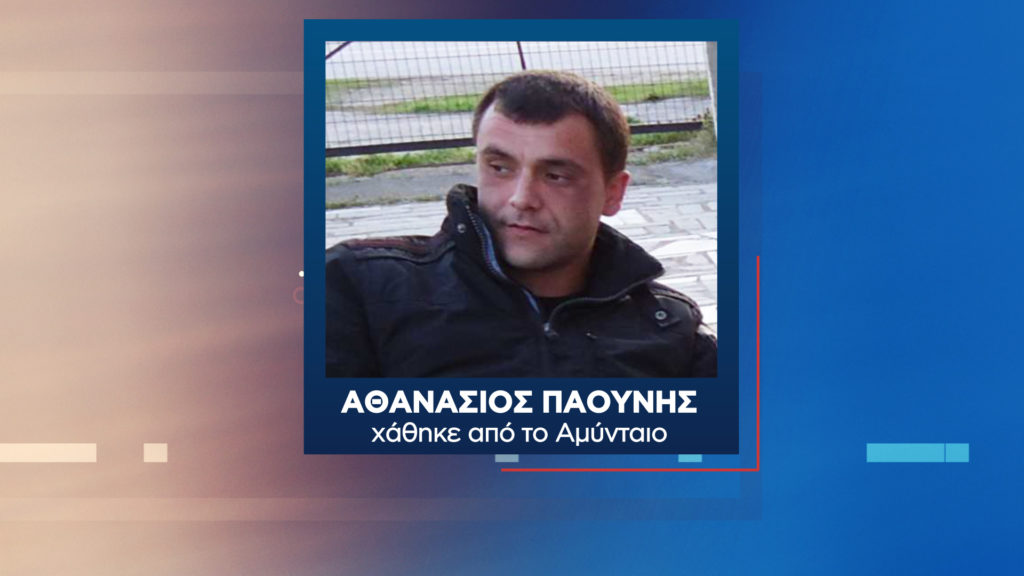 The show dealt with the mysterious disappearance of a young man from Florina.
Share

Thanasis – Sakis Paounis, 33 years old, has been missing for two years. He disappeared on June 10, 2019, from his paternal home in the village of Pedino Amynteou.

The day before his traces disappeared, he had told his mother and sister that he would go to Germany for work. He would leave with a young man from Thessaloniki, probably named George. This is the “key” person in the case, who the family is looking for, to get the answers to their “burning” questions.

The strange thing is that Thanasis left his mobile phone and charger in the window of his house, as if he left in a hurry…

The unknown friend who took him from the village…

The mother of the missing Sakis expressed her anxiety and appealed to him if he is somewhere listening, to give at least a sign of life.

“He was constantly talking on the phone with a George from Thessaloniki. I do not know exactly what they were saying, but as if he were giving him instructions on what to do,” he told “Tunnel”.

The night before her son disappeared, he told her he was leaving for Germany, but he left his mobile home behind.

“All I want is for her to be alive and well, nothing more,” she said with tears in her eyes.

His younger sister, Christina, also spoke on the camera of “Tunnel”.

Sakis had told her that he was looking for a new job in Germany through a job agency.

She fears that something bad has happened to him, as it has been a long time since his traces disappeared.

Christina Paouni wondered why her brother would have a fake Facebook profile.

“He used the name Giannis Papadopoulos, without having his own photos. I asked him why he created it, but he did not answer,” she said.

She added that the day before his disappearance he called her and told her that he would leave for Germany and that he would try to return for her wedding.

“It gave me the impression that everything is in order and booked. He only took his ID with him; he left his driving license behind. He was gullible, if you asked him for help, he would do it “, she concluded full of agony.

“We would not see light from the Consulates in Germany…”

Relatives, friends and fellow villagers of the missing person are looking to get the answers they have been asking for the last two years about what has really happened.

His son-in-law, Themis Fotinos, said that they are waiting for something new, if not from Sakis himself, from the man who left with him, if he is somewhere and watches.

“It has been two years now that he has not shown signs of life. We have no information from the Consulates. When we had done some actions, they did not give us information because it was the personal data that bind them, they told us. A lot goes through our minds. Maybe someone took advantage of his kindness and deceived him. Maybe he was seduced and got involved somewhere.”

“We did not speak at that time, because there was an argument between us. I called my daughter and asked her where he was. I thought he had gone somewhere for work. She told me that he left for Germany. We were waiting for a letter, maybe he would send us something but nothing.”

In Pedino, Florina, the residents talked about a quiet and beloved young man, who did not create any problems.

Through an amateur video, George Makris, a viewer of the show who lives in Germany, shows the place where they saw a man with the characteristics of 35-year-old Sakis Paounis.

It was about two weeks ago in central Stuttgart, in the Bad Cannstatt district, near a church, where homeless people usually gather to get food from. According to the witness, he often sees Greeks sitting there waiting in line for a plate of food.

The center of Bad Cannstatt is just a few meters from the spot where they saw the man, who was wearing a blue uniform.

The show contacted the Consular Authorities in Germany. Our Embassy in Berlin undertook the investigation to help the family of the missing Sakis.

The declaration of disappearance at the police department of Amynteo did not happen on time because the relatives believed that he left with his own will. But seeing the silence, they became worried and were mobilized.

The show’s investigation revealed that he did not travel by air or road to Germany and were not any movements at his bank account.

The employment office in Thessaloniki, which he mentioned to his relatives, replied that he had never contacted them.