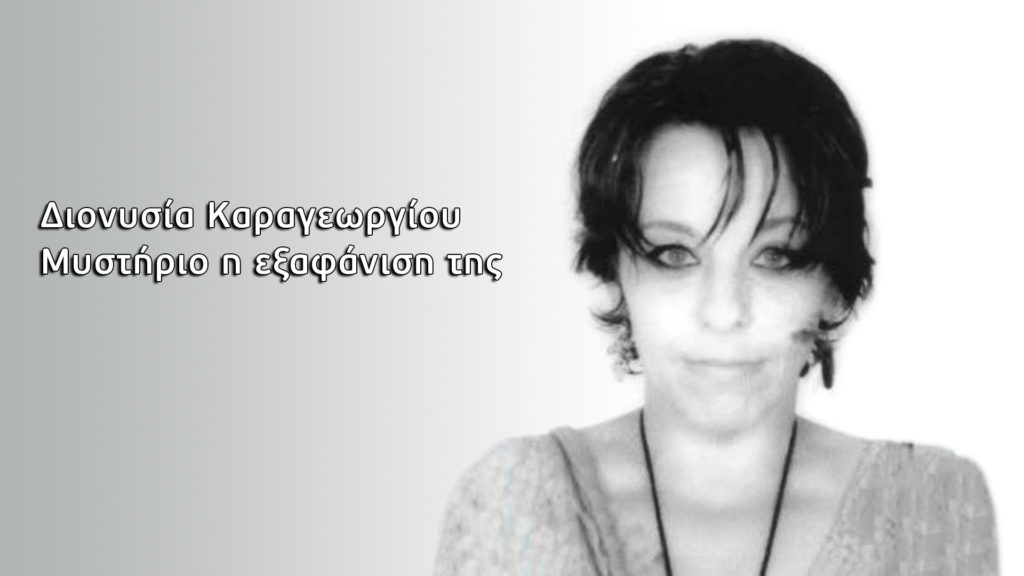 A new disappearance of a mother in Kos, brought to light the "Tunnel".
Share

The unlocked door, her upset things and the deactivated cell phone, compose the scene of the disappearance of Dionysia Karageorgiou, 43 years old.

The mother of a minor girl has been missing since late June from Kos, where she lived.

On July 1, Soula’s mother, as she was called, announced her disappearance. She visited her daily and when she did not show up, she anxiously went to her daughter’s house to see what was happening.

She found her police ID and a ferry ticket to Kalymnos, which had not been used. Her mobile phone has been switched off since then and his last location was in the area of ​​Athens.

Information that reached the “Tunnel” confirmed that the missing woman traveled at the end of June by boat from Kos, to Piraeus. Since then her traces are lost.

Lately, Dionysia has been unemployed, while she was separated with her husband, something that had affected her psychologically and she became introverted.

A month before her disappearance, she confessed to her mother that she was chatting on social media with a man from Athens, named “Dimitris”. According to her mother, he urged her to travel to meet him.

The show received information about a girl who looked like her and the external investigation team moved to different places in Athens, but to no avail.

“She was threatened before she disappeared…”

The sister and mother of the missing woman, visibly upset, spoke to the camera of the “Tunnel” about the disturbing incidents that had preceded.

They describe the mother of a girl as a sensitive woman who has had a difficult time in the last years of her life.

“She tried to contact her ex-husband, but his current partner threatened her that if she continued to look for him, he would handcuff her when he met her. “She just wanted to have warm contacts for the sake of their child,” her sister said.
“All we want is for him to be well and to come back. I cry day and night and I can not calm down. Her child is looking for her,” her mother said at an emotional state.

“She was hatting with someone on the internet…”

The two women who were closest to the missing Dionysia, spoke to the TV crew about their decision to go to the “Tunnel” in the hope that an end will come to their Calvary.
Her sister said characteristically:

“A month before she disappeared, she was talking to someone from Athens who met on social media. He urged her to travel and meet him. She was also a little gullible and I do not know if this person is related to her disappearance. Unfortunately, five whole months have passed and our minds are going to the worst. We decided to turn to Mrs. Nikolouli to find an edge for my sister who is worried about everything that is happening lately and is emerging through the show. It’s our last chance.”

The online acquaintance was also confirmed by her mother.

“She confessed to me that she was talking to someone from the capital and he was promising a lot of things, he was selling her a nice fairy tale. I found a ticket that had been issued before the disappearance, but she had canceled it because she was hesitant. I am panicked because this is the first time she is leaving and she does not show any sign of life.”

Dionysia is 1.53 tall, she is thin with green eyes and black hair, about up to the shoulder. Her special feature is a large flower tattoo that has on her waist. For her disappearance “Missing Alert” has been activated.