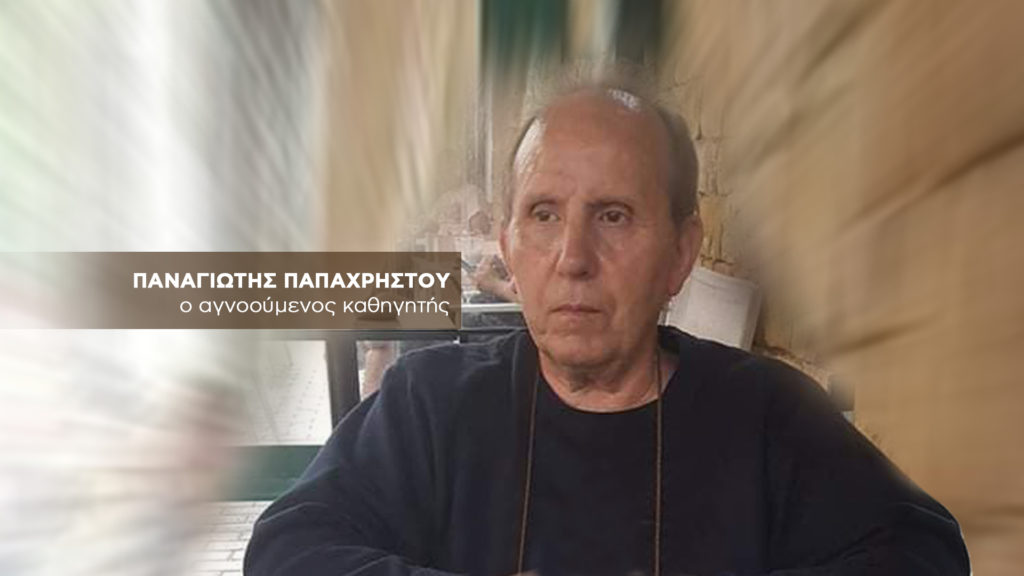 In Petralona, ​​a strange, but at the same time human story takes place, with a lonely English teacher that has gone missing.
Share

It was not his relatives who were looking for him in the “Tunnel”, but his own students, who sounded the alarm when they realized that he had disappeared from the house where he lived alone, last June.

Takis Papachristou, for the last twenty years lived in Greece and worked as an English teacher. He previously lived in Canada, where he was an Assistant University Professor.

In early July, the neighbors were alarmed by the stench coming from the professor’s apartment and anxiously called the police. A search of the apartment revealed that the smell came from spoiled food. The teacher is missing… Everything shows that something sudden happened, that took him out of the house and made him disappear.

An important testimony that arrived on the show from Naxos, spoke about a man with common characteristics with the missing person, who was on the island in July and August. He was exercising daily in a municipal sports center of the island.

“The resemblance is amazing. The man I saw exercising was limping slightly”, said the witness who contacted the “Tunnel”.

The professor was limping lately, due to an accident he had.

The tip may be found in the tracking documents, which are completed due to coronavirus by those who use the facilities.

Students looking for their teacher…

One of the students of the English teacher, who leads the research, speaking on the camera of the show, describes him as an educated and well-traveled man with many experiences.

“I have known him since I was six years old, for almost twenty years now. He has traveled all over the world. At the age of 35 he decided to go to study in Canada and there he became an assistant university professor. Later he returned to Greece as an English teacher, that’s how I met him,” he said.

Neighbors of the missing person were alarmed by the bad smell coming from the professor’s apartment and worried, they called the police.

“The only “relatives” he has, are his students…”

The professor’s favorite student, Marios Kapiris, who started the research, talks to “Tunnel”.

“He hasn’t given any sign of life for almost five months now. Another student told me that he was sad lately and deeply affected by what had happened with the lockdown. He was self isolated. Especially lately I have been the closest person to him. He was to me as my second father. At the beginning, the police did not let me make the disappearance statement, because I am not his relative. After several attempts and after the time passed and I explained the situation to them, they accepted it.”

Neighbors of the missing person report that police officers, with the help of locksmith, entered the house. The reason was the stench coming from his apartment, which was due – as it turned out later – to spoiled food.

Something sudden made him disappear

What impresses about the disappearance of Panagiotis Papachristos, is that his traces suddenly disappeared, while he had made his plan for the next few days.

“I also looked at the hospitals of Attica, but to no avail,” the professor’s student told “Tunnel”.

“He liked to enjoy nature and go for walks. He went to the hill of Filopappos almost every day, but the police did not look there”, the student concluded.

The missing person has a height of 1.68 and for his disappearance Silver Alert has been signaled.