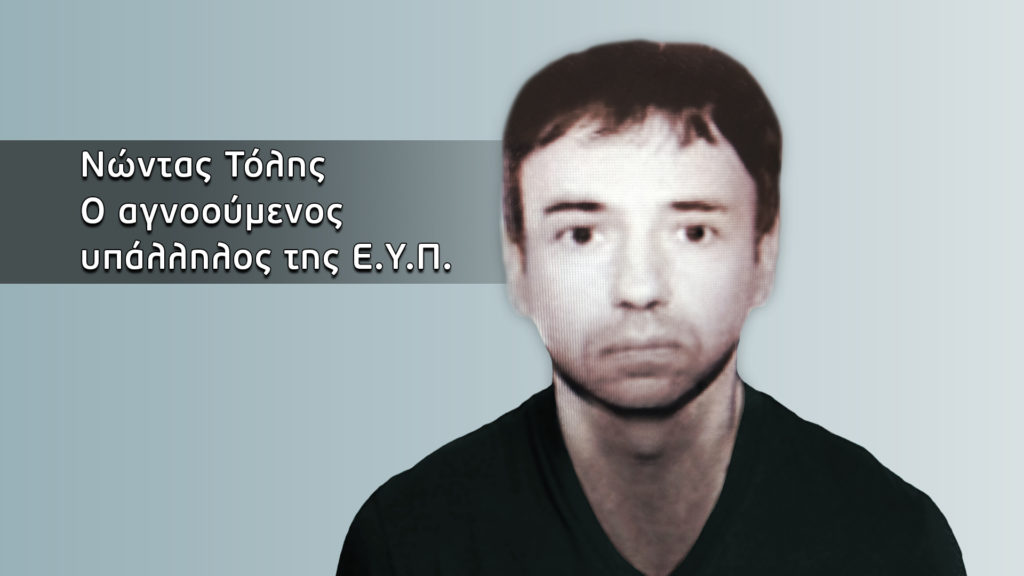 A new strange case came to light on Friday night in the "Tunnel".
Share

A veil of mystery covers the bizarre disappearance of a man who worked for the National Intelligence Service for more than fifteen years in a key position.

Nontas Tolis disappeared on March 20 from his house in Metaxourgeio in a strange way. The many unanswered questions and the tangle of mystery.

The 50-year-old man, who studied in Yugoslavia, is described as a lovable and active person. He was hired by EYP in early 2000 as a translator.

A serious car accident that happened to him about five years ago, was going to bring his life upside down.

“They came here and were looking for him…”

The “Tunnel” was found in the neighborhood of the missing person. There found the neighbors of the mysterious disappearance of the man, about eight months now.

“I have not seen him since March, he is completely gone. They came here many times from his job, from EYP as they said, to look for him, but without result”, said a neighbor of Nontas.

“I knew he was in this job and I did not want to go into his fields. I never asked him anything, but he would not even talk about it,” he concluded.

The incident that shocked him and the unknown woman…

The cousin of the missing man, on his father’s side, spoke to “Tunnel” from Metaxourgeio, the neighborhood in which he lived, and disappeared.

“He has been working for the EYP since he returned from Yugoslavia, because of the language he knew. He had done his paperwork and he had succeeded. He entered the service and held a very good position. He was quite satisfied with his work, until there was an incident that marked him and since then, he changed. Nontas had a car accident, but we do not know more details. He never told us exactly what happened in this accident. Then he asked to be transferred to another department, to a position with fewer responsibilities,” he said characteristically.

He also referred to a friend of the missing person from the EYP, who used to hang out.

“I have the information that he was going out with a girl from his job, but I have no more information. I do not remember her name, but if she is watching, she should contact us, because she might knows something and may be able to help us in the research”, he concluded.

“We hired a detective and he did not find anything…”

The cousin of the missing Nondas spoke to the camera of “Tunnel” about the time of his disappearance, but also about his life.

“I was informed of the disappearance in August. He had been missing since the morning of Saturday, March 20th. The statement to the police was made by his cousin on his mother’s side, who has the house here. We even went to a detective to find the truth, but he did not find any trace of him. So we made the decision to come to Mrs. Nikolouli’s show,” she said.

“We are very interested in Nondas and all we want is for him to be found,” his cousin concluded.

The strange car accident before the job change…

“Nontas was not talking about his job at all,” says another of his cousins.

“He had a car accident and since then there has been a change in the family’s behavior. As if something was bothering them intensely. We never learned the details”, said his cousin and added:” Later for some time he was on sick leave”.

The missing man’s cousin reveals that he went to visit him at the house where he was staying, but no one answered and the neighbors told him that they hadn’t seen him in about twenty days. The surprise for him was when he went to the Police Department to report the disappearance.

“I learned that it had already been declared since March 2021. I asked for it to be made public on television and they told me that they had suggested it to the relative who made the disappearance declaration and he refused. He claimed to the police that he was the only relative of Nontas, while we are also his relatives… ”