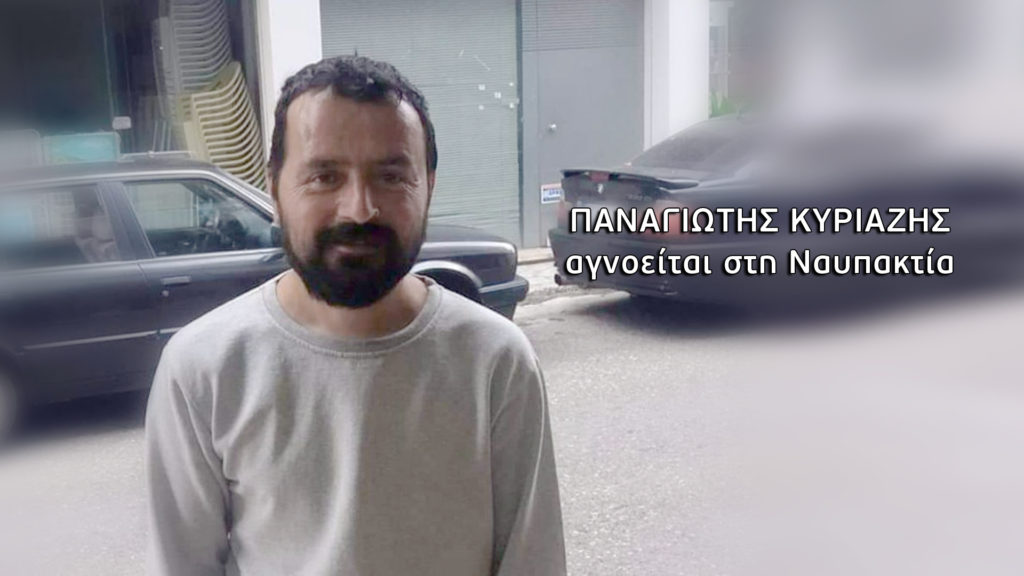 Mystery surrounds the disappearance of a distressed man after feasting at the village fair.
Share

The tragic story of 44-year-old Panagiotis Kyriazis came to light and moved the television viewers. The hope is that he lives somewhere and due to amnesia after a serious car accident he had, he can’t find his way back.

His traces were lost on Tuesday, July 26 from Ano Neokastro, Nafpaktia.

That day he was in the village with his mother and relatives for the festival of Agia Paraskevi. In the afternoon he went for a walk and did not return. He used to walk long distances or hitchhike. His relatives searched everywhere for him in vain. They couldn’t find a single trace of him.

The life of Panos, as he is known in the villages of Nafpaktia, changed radically after the serious car accident he had at a young age and one could say that it is taken from a movie script.

From the point where his life changed, his sister Athena spoke to the “Tunnel” camera about the tragic game that fate had in store for him.

“He was happy that his friend would be released from intensive care after a serious car accident he had with his motorbike. He went out with his company to celebrate and after the party was over, he himself fell victim to a similar accident. Driving his motorcycle, the driver of a car that overtook him, made a maneuver and threw him on the pavement. There unfortunately was a sign that had not been cut properly and fell headfirst onto its ledge. He fought for his life, after being hospitalized in intensive care for three and a half months, with many problems. At one point we almost lost him to a germ. Then our Golgotha ​​continued to bring him back from the beginning,” said the missing man’s sister.

What is infuriating about the case is that the driver of the car drove off and left him helpless at the scene.

“Fortunately, another passing driver who saw him stopped and called EKAV. However, because he was running late, he took the risk of taking Panagiotis to the hospital in his own vehicle. It was his salvation, I believe, because if she hadn’t found him, he might have died by the time the ambulance came,” concluded Mrs. Athena.

This car accident left him with some problems and caused him temporary amnesia.

The mother: He comes to my sleep and tells me where he is…

Mrs. Vasiliki, has been experiencing the agony of a mother for the last few months, who is looking to find out the truth about her son’s whereabouts. Moved, she spoke to the “Tunnel” camera.

“I see Panagiotis every night in my sleep. He is barefoot under a fig tree and asks me to find him. He’s a hurt kid and he’s the only one I’ve had for company.”

The sister of the missing man from the place where he disappeared also spoke on the show.

“That day after the end of the service, he had gone to the square to the feast organized by the villagers. Have fun, laugh, even dance. Then they returned home, in the afternoon he got up and went with our mother to get water from a spring. Later, Panagiotis said that he would go for a walk around the village and return. When the time passed, and he hadn’t returned, they got worried and started looking for him,” she said.

The pain, the fears and the appeal of the mother…

The mother patiently waits morning and night at the house where she lived with her much-loved son, for any news from him or maybe the door will open and he will return.

“I’m waiting for the door to knock. I leave it open at night. I don’t lock it in case Panagiotis returns. He must have found something bad on his way to not have turned back. I don’t know what to say, I’m so scared. The whole world searched, maybe more than a thousand people searched for him in as many days. And hunters looked for him where they went afterwards, but nothing. Where did the child go? Did a car pass by and pick him up?” asked Mrs. Vasiliki.

Unable to hold back her tears and holding the photo of her child, she appeals to anyone who has seen him to at least pick up the phone.

“Whoever has a soul should tell what he saw or what he knows. Say it all. He was the only one I had as a friend, I had no other. Only my Panagiotis….”

Moved and unable to hold back their tears, the uncles of the missing Panagiotis Kyriazis spoke to the “Tunnel” camera from the village of Ano Neokastro, Nafpaktia, where they were on that fateful day.

They speak of a good and cheerful man, who never bothered anyone, nor created problems and everyone loved him. They say that luck was not on his side and that he was tortured, since after the traffic accident he had, his life changed dramatically.

“We were in the village on the day of Agia Paraskevi, at this table. He said he was going for a walk and would be back and I haven’t seen him since. He may have hitchhiked, because he used to do that and maybe someone who didn’t know him picked him up, dropped him off in Nafpaktos, and from there his tracks were lost. He came to the village only on the feasts of Panagia and Agia Paraskevi. He didn’t have a mobile phone with him, if only he had some change in his pocket,” he said characteristically.

He himself went out into the streets and literally plowed the surrounding area in order to locate him.

Another of his uncles, also speaking on camera, said:

“On the day of Agia Paraskevi, we all ate together at my house. He was fine man. He left the village, someone saw him and then he disappeared. Every day we are here searching with my brother. No one has seen him…”

“I saw him happy at the fair…”

The president of the community of Neokastro, Dimitris Vasilopoulos, one of the organizers of the festival on July 26, the day of Agia Paraskevi, spoke to “Tunel” about their man, who he says was loved by everyone.

“There was a huge mobilization for several days and with many agencies investigating. We searched everywhere, but unfortunately nothing has been found so far. He was our Panos… Please find him. Hope dies last, that’s what I want to believe,” he said visibly moved.

Georgios Katsikogiannis, is the witness who last saw the 44-year-old man, before his traces were lost.

“I see Panagiotis at this point and he told me that he was going to Skala. But he was following the road to Panagia. I was happy to see him, I didn’t understand anything to worry me,” the witness told “Tunnel”.

The missing person has a height of 1.70, brown eyes, dark brown long hair, and a beard.

On the day she disappeared, she was wearing blue jeans, a gray short-sleeved top with black stripes, with a blue pocket on the left, and black sneakers.

A special feature of the 44-year-old is the incision on the right side of his head from the ear to the top, a result of the traffic accident he had.

A Silver Alert has been issued for its disappearance.