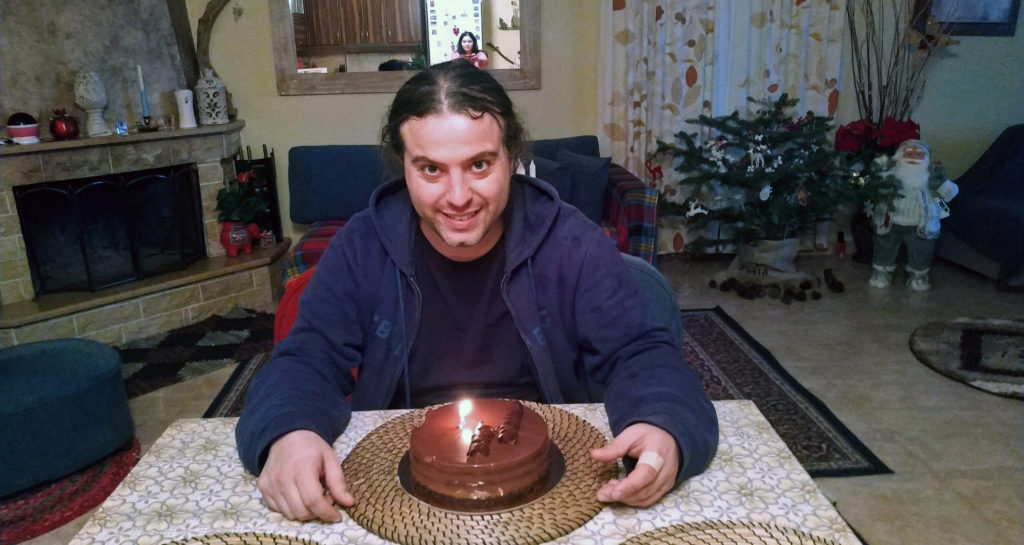 The "Tunnel" on Friday, December 13th, was staggering, with shocking developments in a case that "touched" viewers.
Share

The mysterious disappearance of a young actor from Peristeri in the night of Athens in his car had the most tragic outcome. Stratos Valsamidis, 34, starred in a police thriller.

Today was his nameday and it was like he gave his last performance to receive the loudest applause. He was found dead in his car a week after his disappearance.

People at Leonidas Drosi Street in Paleo Psychiko at the height of Amadriades Park, saw the unfortunate young man “seated” in the back seat of his car and alerted authorities.

According to the first forensic assessments on Balsamides’ body, there were minor injuries to the upper and lower limbs that occurred while he was still alive. The findings show that they pulled him out of a room and then transported him to where he was found.

The family’s technical adviser and forensic doctor – public health doctor Socrates Tsantiris told Tunnel that his death must have occurred at least 48 hours before he was found.

“Histological and toxicological tests are expected to provide more answers about the exact causes of death,” he concluded.

The Mistakes of the Authorities…

Both Mr Tsantiris and Mrs Sofia Polizogopoulou, a lawyer for the actor’s family, pointed out significant errors by the authorities. They did not call a forensic doctor on the site, they did not protect his hands to prevent DNA damage, and they wanted to hand over his car without being examined by the Police.

“It is important now that we are close to investigations to find information from witnesses and security camera material,” said Stratos Valsamidis’ mother and sister lawyer.

A witness who called late at night on the show from the Chalandri area signaled an alarm. The witness saw the actor’s car outside her home a few days before he was found dead. She was struck by the fact that two other suspects got out of another car and boarded the black Fiat Punto, the unlucky youngster’s car with registration number 1384.

Tragic irony is what unfolded just hours before the actor’s traces were lost. While driving, on the night of Friday, December 6, he was talking to his mother by phone about developments in the Tunnel case. It was the thriller with the late young George Lygeros and his mother’s struggle to find the truth. The coincidence with his own story as it unfolded on Friday, December 13th, shocked viewers.

His mother and sister with amateur videos have showed highlights of the victim’s life, sparking sadness after the latest macabre developments.

“Acting was a dream for him…”


The sister of the unfortunate Stratos Valsamidis spoke shortly before the macabre developments on the show’s camera about the moments of agony they spent with her mother, waiting for a sign of his life.

She described him as a sensitive and giving man who had a deep love for theater.

“He’s finished drama school. It was his dream to be an actor. It was a way of expressing himself”, she said.

“I love him, he’s my strength. He was very carrying with me from a young age; I was like his own child. He was always by my side”, she said at an emotional state.


A drama lives the mother of the 30-year-old actor who was looking for day and night for her beloved Stratos.

Mrs Kalliopi, who was also the last person to contact him at midnight on Friday, December 6, spoke to the Tunnel.

“I told him ‘I am watching Angeliki Nikolouli’ and he replied that he had also been shocked by the particular case of the mother who was looking for the truth about her dead son. Who knew that this martyrdom would happen to me as well. We called him on both of his phones, but he didn’t answer our calls. At his house we went in, we found the air condition and the bedroom light switched on and from that point a Calvary began”, she said at an emotional state.

“They had stabbed him to rob him…”

Stratos’ friends learned for his disappearance from his sister by posting it on the internet, which surprised them greatly, as he wasn’t involved anywhere or had troubles with anyone.

“He hadn’t shown me that something was bothering him, he was happy when I last saw him”, Stephanie told Tunnel.

Stratos Valsamidis had disappeared with his car, a black Fiat Punto with registration number YZX – 1384.

His sister also mentioned an incident that happened last March and shocked everyone. Stratos had been attacked with a knife in order to get robbed.

“After the attack, he was hospitalized. It has gone through my mind that the perpetrator might be related to his disappearance because my brother had sued him. That’s why I’m doing everything in order to find something”, she added.

“We celebrated his birthday and we were happy”

On December 10th, Stratos had his birthday, but because his mother would be absent, they celebrated it a few days earlier. “We were so good and so happy together”, Mrs. Kalliopi said with tears in her eyes.

She also referred to her son’s passion for acting.

“He loved acting very much and he wanted to play in Epidaurus sometime. I was watching him in the theater and I was happy. ”

She excluded the fact that he might had left on his own because he would have let them know, as they were tied up and discussing everything as friends.

“If he had left for some reason, he would have called us”, she said.

The tragic mother, at an emotional state, appealed to anyone who knows anything, to contact the show.